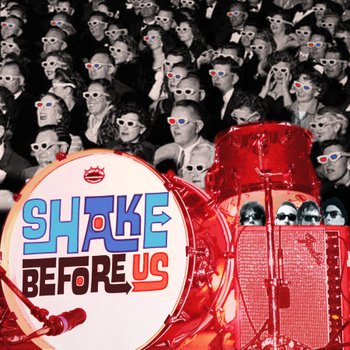 The debut full-length from Shake Before Us was recorded in early 2012 with John “Swami” Reis (Hot Snakes, etc.) producing and local engineering master Ben Moore on the controls. Recorded directly to a vintage 8-track reel-to-reel, Fonda explains “John’s approach to capturing our vibe on record was to go after those classic old sounds. He was determined to record us in the fashion of the 1960s. That meant not only recording in dress shirts and ties, but having to get the song right in one full take. Straight to 8-tracks, baby!”

Their get-buzzed-and-turn-up-the-fuzz attitude yields true tales of lost faith, booze, drugs, sin, and self-doubt on the record. The sound, a maniacal mix of organ, guitar, dual howling vocals, deep drums, and even deeper bass, pairs the past with the future, vintage with modern. “Sure, the guitar has a ton of reverb,” says producer Reis, “but it’s the sound of the band, and it’s a sound that needs to be embraced.”

Highlights of the album are the opening track “All Day and Night,” which sports a contagious riff and a hook line that one can’t help repeating for several hours afterward, garage rock spine-tinglers “No Judge, No Jury” and “Angels of Altamont,” and the final track “Devil May Care,” which often closes out their live shows and has everyone dancing. The band also does homage to one of their favorite 1960s artists, the Sonics, with a hopped-up cover of “Going Home.”

1. All Day and Night