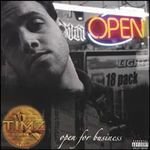 One of Timz' goals for his album was to change average Americans' view of the Middle East and Middle-Eastern Americans. It strikes me as funny, then, that the project carries a liquor-store theme. The nonmusical tracks, "Intro" and "Interlude," feature cash-register noises and doorbells.

The background music isn't bad. A lot of the tracks use Middle-Eastern songs as backup; the loops are short and could use more variation, and the hip-hop beat is nothing special, but I like the clashing finger cymbals, flutes, and wailing string instruments. The sound quality is bad: scratchy, muffled, and fuzzy.

Timz has a good rapping voice. In parts he sounds like Tupac, except he's not as relaxed and sometimes seems to struggle to keep up. The lyrics are an odd mixture. On some tracks he's relaying his religious tolerance for Christians, Muslims, and Jews. But on most tracks he relies on the usual West Coast subjects: bitches, money, limousines, and big butts.

The song "Iraq" is the best on the CD. It cites biblical and historical references to Iraq: "The Garden of Eden was Iraq... Math was first taught in Iraq... Everyone in the world bleeds Iraq.