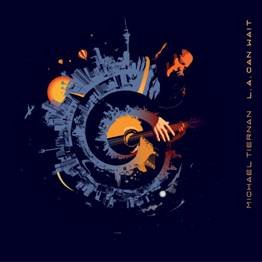 Why L.A. Can Wait? Mostly because of a few calls Michael Tiernan has received the past couple of years.

One went like this: “Don’t worry Mike, I am Strong”. Tiernan hung up the phone and couldn’t believe it. Stage 4 cancer, his own brother. 2 years later, as Tiernan was recording tracks in the studio for “Strong”, the very song he had written about his brother Joe’s battle with the terrible disease, he received another call, this time from the hospital. Three days later, his brother had passed away. Tiernan played the song for his brother on the last morning of his life. That song, “Strong”, is the swirling center of Michael’s emotional and inspiring new album, “LA Can Wait”.

Yet “L.A. Can Wait” is not about death, and is certainly not a downer. “L.A. Can Wait” is actually an incredibly celebratory album that reveres each unique color in the spectrum of life, from birth to death, with the over-arching mandate to appreciate and enjoy every moment in between.

In fact, a cancer-survivor himself, Tiernan penned two of the most tender of love songs, inspired by a couple other calls he got, the ones where his wife said, “I’m pregnant”. These are songs about the unexpected miracle of new life. Tiernan has produced two children since his last album release, “Spaces”, in 2007. Having been a year away from being ordained a Catholic priest in Rome just several years before, kids were never in the picture – but, oh, how life changes. Good thing too, because this new set of Tiernan’s tunes are celebratory tearjerkers about all the amazing twists of life, especially the unexpected ones.

“L.A. Can Wait” is an album for both the goal-driven workaholic and the free-spirited contemplative. It takes you from the beach to the city, from the temple to the tavern, and leaves a little bit of your heart in each place. This is Tiernan’s 4th studio album and was produced by L.A.’s rising talent Andre de Santanna, who learned a lot of his production chops from multi-platinum producer, Roy Thomas Baker, and has production and performance credits with an array of top artists including Jason Mraz. Michael’s past three albums are all award-winners (two-time Los Angeles Award winner for Male Singer-Songwriter of the Year and Triple-A Album of the Year, International Acoustic Music Awards Male Artist of the Year Runner-Up, Great American Song Contest finalist).