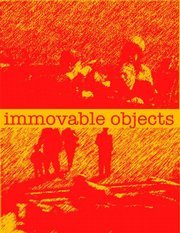 Hoping It Stays Just This Broken

Songs:
1) Raindrops in Morning Traffic
2) Bad Judgment
3) Shut Up and Listen
4) Summer Is a Broken Heart
5) What?
6) I’m Not Depressed I’m Existential Rock
7) You Don’t Have to Go Home (But You Can’t Stay Here) 8) Raindrops in Evening Traffic
9) James Trent
10) Sheen

While there’s a kinky pleasure to hearing something (good Lord, anything) except guys in T-shirts bang out the same song every band has ever played, there’s also a difference between expressing individuality and irritating the listener. Some of Immovable Objects’ electronics-laden tracks accomplish the latter.

Acoustic guitar and well-played bass ground the music, but when things settle into being comfortable and familiar, Gagin ramps up the reverb and special effects until it’s a muddled and sometimes fuzzy mess. I’m interested to see what the city’s notoriously mainstream crowd will do with this beautiful and strange offering.