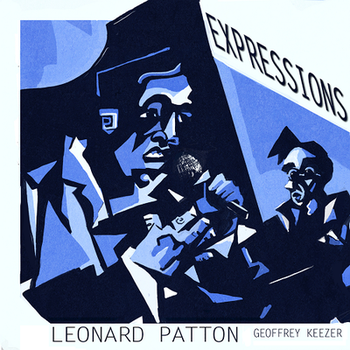 "Recording in the studio with Keezer was probably the easiest and most fun process I've ever been a part of," said San Diego vocalist Leonard Patton about his latest CD, Expressions, recorded at local guitar hero Peter Sprague's Spragueland Studio in July.

The album is a freewheeling duet featuring the soulful, burnished tenor of Patton and the internationally acclaimed piano virtuoso Geoffrey Keezer.

Although he resides in San Diego, Keezer continues to work most often outside the city, touring the United States and around the globe with artists like vibraphonist Joe Locke and saxophonist Tim Garland.

One possible precedent for the music on Expressions is the duet CD Play by pianist Chick Corea and vocalist Bobby McFerrin. There is a similar feeling of empathic intuition and devil-may-care adventurism.

"There is a nice sense of ebb and flow between Keezer and I," says the singer, adding, "it's very much a collaboration...a lot of give and take on this record."

Patton has also been working with Sprague for years.

"Leonard Patton is one of my all time favorite musicians," said Sprague, "He has this incredible voice, and he's also a great trumpet player and saxophonist," referring to Patton's very McFerrin-esque abilities to solo imitating the sound of various horn and string instruments.

There are seven "covers" on the record with an equally eclectic list of source material, ranging from the Tears For Fears classic, "Everybody Wants To Rule The World", to the Lifehouse hit, "Hanging By A Moment."

Patton's smoky tenor revisits Wonder's gospel inflected, "Love's In Need Of Love Today," which fits him like a glove, given his depth of experience in the genre.

Expressions is a heady document, with, "just the right mix of pre-composed material and magic made in the moment," says Sprague, who ought to know, since he engineered the sessions.

Patton's regular gigs include teaching and performing musical theater, he's been featured in the Lamb's Players production of miXtape, for several years, and he works with guitarist Peter Sprague in group and duo settings.

Keezer was an international recording and touring star long before love brought him to San Diego--he came to marry the remarkable San Diego Symphony bassist Susan Wulff. The pianist does most of his work out of town, which is a shame, because he's a major voice who never fails to surprise.

Stevie Wonder's glorious gospel piece "Love's In Need Of Love Today" opens the disc. Patton's got a similar range, but his burnished tenor is slightly deeper and huskier. Keezer's accompaniment is sensitive and crystal clear, with perfectly placed articulations that propel the inherent groove without being a slave to it.

Unlike so many of today's singers, Patton doesn't fall into the trap of showoff virtuosity and ridiculous ornamentation. He's got chops for sure, but he's also got taste, and one of those god-awful "auto-tune" devices would just sit in the corner, bored to death at one of his sessions.

"Everybody Wants To Rule The World," is next, with Keezer alluding to, rather than reproducing the classic vibraphone vamp intro. Patton's vocal is naked and unadorned, and much less fey than the original Tears For Fears version.

Alec Wilder's "Blackberry Winter" is the closest thing to a traditional piano/vocal performance here--and it that vein, it delivers. Patton cradles the melody with grace and gravitas, and Keezer responds with a joyfully expressive solo that laces intricate filigree through the harmonic landscape. I first heard Keith Jarrett play this tune many years ago--that memory came rushing back to me as I experienced their version--quite a compliment, in my book.

Patton and Keezer have a run at Thelonious Monk's "Think Of One," and it's one of those freewheeling moments that make this disc essential. The two musicians improvise on the theme as equal partners, and it's hard not to think of Bobby McFerrin, particularly his collaborations with Chick Corea, on their landmark 1992 Blue Note release, Play.

Keezer and Patton tease the melody out in a push/pull dynamic, changing on a dime from terse staccato's to elongations on the time. The pianist inserts passages of almost barrelhouse walking bass, over which the vocals soar and swoop like a bird of prey.

The music of iconoclast Ornette Coleman has left an indelible imprint on Patton and his original, "Go Fish" bears that out. There is a sense of daring-do happening, and a playfulness that reflects the organic nature of Coleman's oeuvre--and, as tenor saxophonist Archie Shepp once predicted, "Ornette's music becomes more important as each year passes." One can only hope that Coleman's influence will become more commonplace. "Go Fish" is a welcome turn in that direction.

Another Patton original, "Morning Sun," begins with rolling arpeggios and tastefully overdubbed electric piano bell-tones, yielding to an astonishing Keezer solo on both instruments. "Morning Sun" has all of the lyrical optimism its title implies, and Patton's soulful delivery conveys a sense of yearning that digs beneath the cheery sentiment for a more complete emotional statement.

The finale, a free rumination on the showtune, "Softly As In A Morning Sunrise," begins as a ballad with Patton's honey-toned, laid back essay settting up a second chorus in a furious double-time. From there on out--it's strictly music of the moment, as Keezer responds, supports, opposes and invents around the stream-of-consciousness scatting. It's cinematic, even kaleidoscopic in nature--and worth the price of this disc on its own.

One final note: the album was engineered, and co-produced (with Patton) by Peter Sprague at Spragueland Studios, and it must be mentioned that the sound on this disc is superb. Keezer's piano and Patton's voice are beautifully reproduced and every gesture captured in high fidelity.