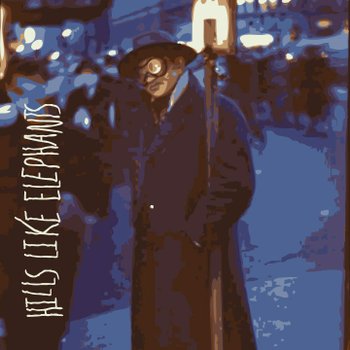 Hills Like Elephants bandleader Sean Davenport began prepping their full-length just before his previous band Gun Runner announced a “long term break up” in late 2011. The expression is consistent with the heart-on-sleeve mood of HLE’s The Endless Charade, a concept album “about certain girl situations.”

“A girl kind of messed me up. I was dealing with that for a while and the music became therapeutic,” says Davenport. “Lyrically, I felt like I made breakthroughs because I was having such a rough time and things were just coming out. A lot of honesty.” The full-length features cover art by Jon Kruger (River City).

“The album’s called The Endless Charade and, from one end of the album to the other, it shows you that as bad as it gets, it’s going to be OK, and you learn along the way. The games never stop - you have to learn how to play. It’s not spiteful. It’s more just if you can relate.”

“Every time I give Chris a musical reference, he always knows exactly what I’m talking about. He’s the other part of the album. He’s good at identifying what I normally go for and gives the album continuity. He knew that for guitar I usually go for something Trip Hop where maybe two notes can be the whole thing, and for keys I go for Talking Heads or the old school Wurlitzer organ. He knew how the vocals would sound. So we’ve been able to work very quickly. He’s phenomenal.”

As The Endless Charade makes use of vintage drum machines, Moog plug-ins, an old school pump organ, and an “‘80s synthesizer with fans blowing in your face to cool it down,” Davenport says the real challenge thus far has been making what happens in the studio happen live with a lineup including Andrew Armerding (River City) emulating synths with guitar and effects, former Gun Runner trapsman Carlos Ortiz, and guitar/bassist Danny Gallo.

“The idea was to make a keyboard album where the guitar is textural rather than the main drive of the song,” Davenport says. “I didn’t want to do a Sea Change or Bon Iver thing, where the music matches the mood, which is sad. I wanted to keep it dancier. So the album is like a remix of the songs I started with. None of them sound like how they started.”