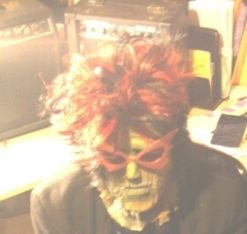 Actually, the cover art, cd inlay and lyric sheet all look very cool. I decided that the price was worth it, before I even listened to the music!

2nd Son of the Devil is the best song on the CD. Kinda' White Stripe-ish.

Demented Angels is friggin' awesome, it doesn't sound like anything I've ever heard. Pretty heavy, reminds me a lil' of old school Industrial - NIN-esque?

So Long has a heavy guitar (rythm & lead) - Not sure about the vocals though. I've listened toentire CD approx. 8 times and it is starting to grow on me more than the others.

Eighty sounds like an 80's song you would hear in a John Hughes teen flick. It's an excellent instrumental, GREAT CHANGES THROUGHOUT. It made me feel nostalgic for 80's music & movies. I could totally see this song being used for a movie at some point in the future.

All in all - I learned from the CD insert that EVERYTHING is done by 1 guy. Writing, Playing instruments, mixing and eerything else - done by T. Sesma. If you take this into consideration, this is a TERRIFIC piece of music/art. If this is the dude's very 1st demo / debut album - and he did it all himself.....Can't wait for is 2nd album. I imagine it would be a really interesting live show. Makes me wonder what he cold be capable of if he hooked up with some professional musicians or producers. ***Be on the Look out for Psychosally - They have potential to be BIG someday!