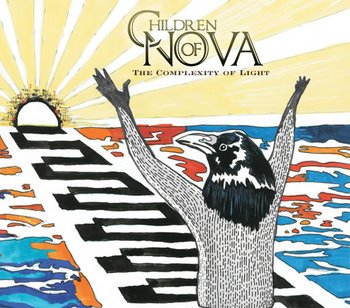 The Complexity of Light

The Complexity of Light was released March 26, 2009. It
stands as a groundbreaking record with a grand artistic scope. The album's concept uncovers a science fiction story about two characters; Nova, the defender of light, and Corbin, the defender of darkness. Both are tested to become the leader of planet Arcaedion.

The epic saga shows their artistic vision in unique fashion. Concept aside, the music is marked by intricate arrangements, displaying the band's wide chemistry in every track.

The band offers a point-by-point guide to understanding the album:

1. Children of Nova: Our name follows the belief that we are all made up of the same space materials and stardust from giant supernoval explosions.

2. Nova: The leader and defender of light. One of two characters (the other being Corbin) to be tested as leader of his world. He believes he can save the world and everyone in it by instilling hope and courage into their souls. Since childhood, he has suffered extremely lucid, vivd dreams of the future which he has used to bring the hopeless and deprived back to the light.

3. Corbin: The leader and defender of darkness. Born from intense reactions of energy on his home planet, he too was chosen to pursue leadership over his world. But what he craved was control. Although more powerful than his nemesis (Nova), he lacked the ability of forsight. In his experiences he found that crows on Arceadion carried small fragments of time inside them. When they gazed into his eyes he saw a piece of his life, either past, present or future. His connection to the birds was immediate and with their aid he formed his destiny; which ultimately leads to the destruction of the sun.

4. Arcaedion: The home planet to our characters and the setting of our story.

5. The Order: Corbin's personal army of pure darkness. Once thriving people with unique freedoms, they now turn over their existence to the most powerful of beings and destroyer of the sun, Corbin. He promises them a fresh start in a new system of worlds that he will take them to once he has acquired enough of their life energy.

6. Second Sight Blackout: A prophecy showing the complete destruction of Arcaedion and the final steps of Corbin's fall into darkness.

7. The Fall of Aphonia: The end of the common man's silence. We all must be heard.