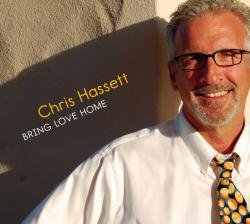 In a tribute to nearly three decades of singing in and around San Diego and on the eve of his 60th birthday, San Diego singer-songwriter Chris Hassett releases his first collection of original songs and standards, Bring Love Home. Having developed a small legion of supporters in San Diego over the years — primarily a cross-section of this town’s progressive, gay-lesbian, and liberal religious communities — Hassett is now poised to expand his fan base with a 15-song collection that not only captures the energy and freshness of a live performance in May 2009 but also reveals who he is as a man, an artist, and an eloquent and gifted agent for change in the broader community.

“I’m ready to take this show on the road,” Hassett says, revealing a youthful enthusiasm for his music. “My music expresses my world view, my politics, and my life. I think that’s what many people appreciate in a singer. They want to know who you are, what makes you tick, and maybe get a new perspective on their own lives.”

A resident of San Diego for over 30 years, Hassett first performed a benefit concert for local AIDS support organizations in 1987 and that show began a series of “Friends and Lovers Concerts” which continued through the mid-1990s and, in later years, included other standout local musicians, notably Peggy Watson and Kay Etheridge. With each annual concert, Hassett, who was already known for his warm expressive baritone and his ability to sing new life into old standards and folk-rock classics, introduced more and more of his own compositions, providing a running commentary on his life and on the issues in his community.

Hassett’s compositions are intensely autobiographical. Consider “A Woman Is My Friend,” which acknowledges that women, starting with his mother and then girlfriends in his childhood, have always been his best friends. “And I’m naming names, too,” Hassett laughs. “Seriously, I think gay men have a lot to teach all men about friendship and respect for women. I love performing this song in concert.”

In another example of true-life set to music, “Into the Light” captures the place and time of his bedside good-bye with his partner who died of AIDS in 1991. “I had to do something with the experience,” Hassett explains. “That last evening with friends and family nearby and watching this precious and fragile life leave us was so powerful. I cried writing it but each time I sing it, I feel stronger. So many people have come forward to thank me for helping them deal with losses they’ve endured. We all belong to a fellowship of loss and we need to share our stories.”

Bring Love Home features some light-hearted songs as well. Hassett’s most requested song is “El Centro,” set to the tune of Marty Robbins’ “El Paso” but telling the romantic story of two cowboy cloggers rather than the original tale of an ill-fated gun slinger and his Mexican beauty. “Music was my constant companion growing up and I loved just about everything I listened to. But I had my favorites and they were usually male singers with strong, expressive voices. On ‘El Centro’ I always extend my apologies to Marty Robbins before I launch into the song.”

The album title, Bring Love Home, is actually a phrase lifted from his song about marriage equality, “Let Love Be Your Family.” In the musical crescendo of this song’s message, Hassett asks, “How can any marriage be whole / How can peace reside in our souls / Until Bonnie and Jan, Michael and Ted, Carol and Irma, Alfredo and Ed / Stand before family and friends and say ‘I do’?”

“The constitutional logic of this issue is so clear,” Hassett notes, ”but when you’re dealing with people’s prejudice and belief systems – it’s awfully tough to change minds. My hope is that music can sometimes reach hearts first and open people up to changing their minds.”

A natural singer, Hassett’s knowledge of music is largely intuitive. Although he learned enough piano and guitar in his early years to write strong melodies, in performance he seldom puts his hands on an instrument, preferring to focus on singing and connecting with the audience. “Working with other musicians is an unrivaled joy in my life,” Hassett confesses. “When you have a chance to craft a harmony with Peggy Watson or work out a just-right intro with a great piano player, life just shines a little brighter.”

As a member of the boomer generation, a gay man, and a life-long and unabashed liberal, Hassett doesn’t claim to be the voice of a generation but he does feel his music — deeply personal and drawing directly from his life experience — will resonate with a lot of people in communities across the country. With CDs in hand, he has already started booking a series of concerts, expanding his social media activity (he’s an avid blogger), and lining up other personal appearances. “For me, the audience always makes the show and, over the years, I’ve been lucky to have great audiences show up at my concerts.”

The third of five boys, Hassett grew up in an Air Force family and discovered a strong singing voice at an early age. His father, who had some success in radio and TV announcing prior to re-joining the Air Force, brought stacks of records home. “My earliest memories of music are hearing Dad sing — like constantly — and listening to other great singers like Frankie Laine, Sarah Vaughn, Frank Sinatra, Jo Stafford, Bobby Darin, so many more. Every generation has great singers who stand out from the crowd. I always listen for those special voices and I hear them in the generation coming up.”