Hike to Boucher Hill through the pine and oak forests of Palomar Mountain State Park.

This year, the Palomar Mountain summits have shown off their best vernal coloration rather late -- through June. It's still a fine time to visit Palomar Mountain State Park, which features some of the finest montane scenery in the county, plus -- on this three-mile ramble, at least -- a great view over the lowlands from a high point known as Boucher Hill.

Drive up either South Grade Road (Highway S-6) or East Grade Road (Highway S-7) to the Palomar summit, then head west on East Grade Road to its terminus at the state park's entrance (fee charged here). Park at the Silver Crest Picnic Area, just beyond. Using the paved park road, walk west toward a five-way junction. Now continue west, on either branch of a paved road that loops toward Boucher Hill. Or instead, take the pathway on the ridgeline in between. Black oaks crown the ridgeline, their gnarled limbs bare until a few weeks ago, but alive with fluttering green leaves now. A few white fir trees cling to the slope as you approach Boucher Hill lookout. There's a fine view into the lowland (Pauma Valley) to the west, but this time of year the coastal haze often obscures the vista of ocean and coast.

Now find the Boucher Trail, which descends on a stretch of old fire road to the north. Beyond more black oaks, bracken ferns, and a meadow dotted with baby-blue-eyes, the trail swings right to traverse a north slope, entering a dense, almost gloomy forest of white fir. Upon reaching Nate Harrison Road, cross and pick up the Adams Trail on the other side. You're in mixed forest now, with a few bigcone Douglas fir trees with wandlike limbs that tower head and shoulders above all else. Winding around a sunlight-flooded ravine, you'll see beautiful specimens of dogwood and ceanothus, perhaps still in bloom. A bit later in the season, Humboldt lilies brighten up the shady areas.

When you arrive at Cedar Grove Group Campground, walk out to the entrance, where you can pick up the trail to Scott's Cabin. A steep climb through mostly white fir forest takes you to the modest remains of the cabin, built by an early homesteader. Complete the hike by bearing right at the next junction, taking the trail that ends near the park office, opposite the picnic area. 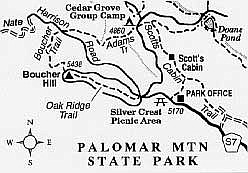