A conversation open to the public regarding drone policy and ethics. This is part of the Drones at Home series at the [email protected] on UCSD's campus.

Since March, an exhibition entitled Drones at Home has been taking place at the California Institute for Telecommunications and Information Technology (Calit2) on UCSD's campus.

The series is focused on "The strange allure of drones and the push for their domestication -- by governments, corporations, and everyday citizens," without ignoring local ties to General Atomics and the predator drone, or the use of drones on the US/Mexico border. Drones at Home even alludes to some of the partners of the very research institution where the series takes place.

As the series approaches the end of phase III, a town hall meeting occurred on December 6th, which featured "a conversation about drone policy and ethics," led by Visual Arts professor Ricardo Dominguez. 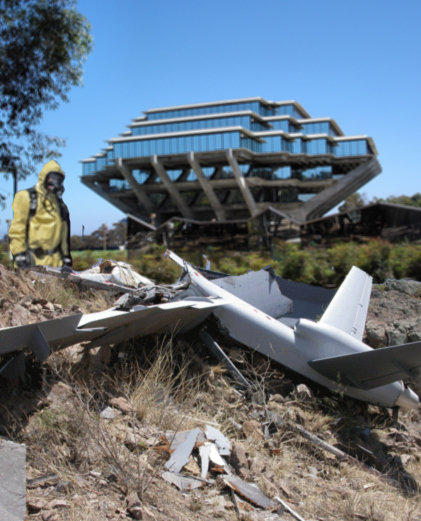 Another topic was the alleged drone crash that occurred on UCSD's campus recently, according to an organization that calls itself the UC Center For Drone Policy and Ethics. It is more than possible that the incident was an artistic gesture but one thing is certain, our species has entered a time when warfare can now be conducted by remote-controlled flying robots, and this phase of human history has just begun. What would seeing these objects fly over San Diego mean?

Phase II of Drones at Home involved panels of researchers, theorists, science fiction writers and film makers which created an interesting environment: storytellers had access to details they might not otherwise, and researchers (at least one of which designed a drone for the Department of Defense) got exposed to thoughts emanating from sci-fi writers, who seem uniquely positioned to warn our species of possible futures.