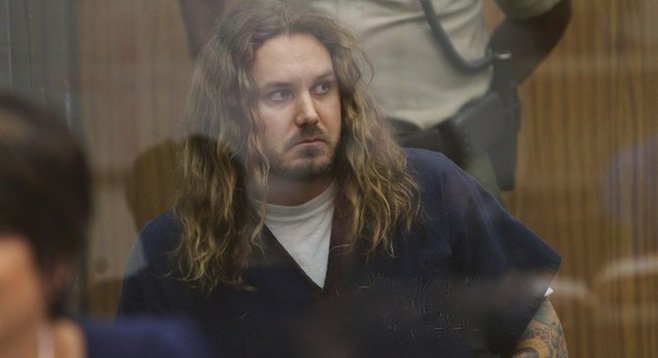 The lead singer of a heavy metal rock band, accused of hiring a hitman to eliminate his wife during a difficult divorce, is due in court this Friday, August 2.

The attorney for Timothy Lambesis, 32, is expected to request return of certain items seized by law enforcement during their investigation. A judge will rule on what personal belongings, if any, will be returned to defendant Lambesis before his preliminary hearing, which is currently set for September. The divorce from his wife Meggan may be finalized by that time.

Lambesis and attorneys for both sides will be before Judge Kimberlee Lagotta at 1:30 in San Diego’s North County Superior Courthouse located in Vista, California.

Timothy Lambesis is currently at liberty on $2 million bond that was posted last May.

Meggan Lambesis filed for divorce in September 2012, the couple married in June 2004 and have three adopted children. In court paperwork, the wife stated that she discovered her husband was having an affair with another woman, and that he told her he had lost his faith in God.

Timothy Lambesis was arrested on May 7 of this year, after he gave an envelope full of incriminating evidence to a man he thought was a hitman, but was actually an undercover law enforcement agent, a prosecutor said. There was cash for “expenses” and the address and gate codes and instructions on how to get into his wife’s residence in the envelope, according to prosecutor Claudia Grasso.

Lambesis has been charged with one felony: solicitation to commit murder, for which the maximum possible sentence is nine years, according to Grasso.

The defendant pleads not-guilty through his private attorney Thomas Warwick Jr. This attorney has described his client’s music as “American Christian Metalcore.” Lambesis is lead singer of a band named As I Lay Dying, which has released six “studio albums,” the last in September 2012.

Until his arrest, Tim Lambesis lived in Carlsbad with a girlfriend; he rented that home from his parents. The defendant is now on “house arrest” and wears a GPS monitor, in accordance with his bail conditions.

Prior to his arrest, Lambesis had publicly posted “clarification” of words in one of his newest songs. “I wrote the lyrics to A Greater Foundation as a way to process some of the religious beliefs from my childhood that I had let go in exchange for finding truth.”

Lambesis posted: “The god I grew up learning about was more like a creation of the 4th century emperor Constantine than anything of the 1st century Judeo origin.” And “I do not regret abandoning ritual or tradition in the search for truth.” And, “In short, tradition and truth are often at odds with each other.”

And, “The line has been blurred, but one thing is certain. I am still inspired by the words of the man who told us to “love our enemies” and to serve “the least of these.””

Timothy Lambesis is currently at liberty on $2 million bond that was posted last May.

We were told that he is worth several million, being a successful rocker. So, he should have had no problem coming with a reported $160K for the bail bondsman. And it appears as if he was ready to post bond shortly after his arrest.

I'll bet a large number of people in divorce cases might hire an assassin if you asked them. I don't trust our DA.