About 70 people rallied yesterday afternoon (July 17) outside Congressman Darrell Issa’s Vista office to protest the “border surge” called for by the bipartisan Corker-Hoeven amendment to proposed federal immigration reform law that would significantly increase militarization of the U.S./Mexico border, adding 20,000 Border Patrol agents (more than doubling the current force), $4.5 billion in funding for increased border surveillance, and another 350 miles of fencing along the border.

The protest was one of 11 happening nationwide during a “day of action” called by the Border Network for Human Rights.

While waiting for busloads of demonstrators that were delayed in traffic, several early arrivals took photographs and video of a lone counter-protester who stood behind his van silently videotaping the afternoon’s proceedings and participants, holding a sign and wearing a self-fashioned paper tri-point hat festooned with teabags and American flags, both reading “I didn’t vote for this Obamanation.” 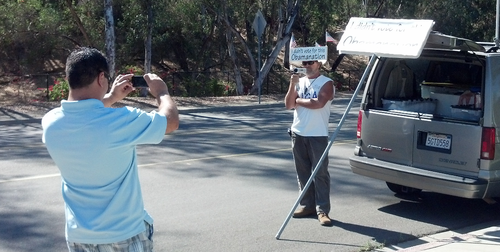 When the rally began, speakers (all addresses were delivered in Spanish) decried the amendment and the challenges and intimidation they said increased scrutiny would present for both undocumented migrants and legal residents. Supporters raised signs with slogans such as “Control the Border Patrol” and “No Human is Illegal.”

“We stand against the militarization of our neighborhoods and the growing number of deaths associated with it along the border,” said Lillie Sanchez of the Human Rights Council of Oceanside via a translated statement.

“We do not consent to the wasteful use of our tax dollars being spent for more agents, military weaponry and drones,” added Rosie Diaz of the Bi-National Front of Indigenous Organizations. “Instead we propose to direct economic resources that we produce with our labor into healthcare, education, and housing for our families.”