A recent list released, created by CQ Press and compiled on FBI statistics, ranks San Diego as the 2nd safest city in the United States with a population above 500,000. The annual list was compiled on crime statistics to rate the cities for the beginning of 2013.

Read complete details on how the list is compiled. 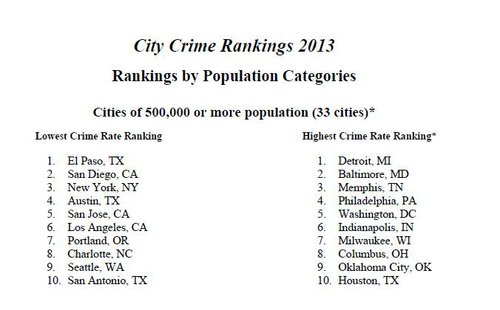 A recent list released, created by CQ Press and compiled on FBI statistics, ranks San Diego as the 2nd safest city in the United States with a population above 500,000. The annual list was compiled on crime statistics to rate the cities for the beginning of 2013.

Read complete details on how the list is compiled.

Another 10-20 years, and Detroit might not even have 500,000. El Paso? The El Paso just across the border from sleepy little Ciudad Juarez? Another study in 2011 showed Ciudad Juarez was the 2nd most violent city in the world, with a death rate of 148 per 100,000 population. Must be a really good fence down by El Paso to keep all the murderers from crossing the border.

You'd be surprised what a difference a border makes. But I hear what you're saying, Aa--I find it hard to believe that El Paso is the safest city in the US too. The report did say it was based on FBI statistics. Maybe the FBI is not notified about everything. Especially in Texas.

El Paso is the home of Fort Bliss, one of our biggest Army bases. And on that base, besides a massive military operation, is the El Paso Intelligence Center (EPIC) run by DEA and U.S. Customs and Border Protection. So I think that has something to do with it.

Dwbat--the argument makes sense. Let's just say I am skeptical of numbers released by the Feds.

"Let's just say I am skeptical of numbers released by the Feds."

Of course you are. They don't fit your preferred narrative/bias.

I too am skeptical of the numbers. Going by my experience, safety is an illusion.

From a personal perspective, having lived here since 1975, and prior to that Detroit, I can say with some experience that Detroit is a good place to be from. In fact, that 500,000 mark is a figure I used to cite, because it was the number of residents Detroit seemed to have lost in my first 30 years here, while also the number San Diego gained. And having visited El Paso frequently over the years, I am surprised at that ranking. But you know, a lot of crime statistics are based on police reports. And from my experience, some departments actually make it hard, or essentially useless, for residents to make reports of crimes. So it looks like there's a low crime rate, when in reality, it's just a low rate of recorded crimes. I still prefer San Diego, 2nd rate or not.

Detroit looks like a third world country, it is veyr sad. I also love Detroit, and hope it can return, but doubt it.

In reading that very scholarly explanation of how these rankings were determined, I can't see any glaring methodological flaws. (A closer analysis might do just that.) I'm just very skeptical of any of these published rankings of anything and by anybody. The USNews rankings of schools, long a "go to" source for solid info have yielded some absurd conclusions, and when the results were challenged, the mag had to admit that it received bad data or misused that data it employed. All such rankings can be challenged in many ways, and when a result that is patently absurd is obtained, they need to be challenged.

The absurd conclusion here is that El Paso is the safest such city! If I didn't know better, once again, I'd think this was a piece from the Reader's satirist, Mencken. El Paso sits right across a shallow river from arguably the most dangerous and crime ridden city in the western hemisphere, Juarez. There is undoubtedly a fatalism on the part of its residents to dealing with crime, both petty and serious, and likely they just don't bother to report it. The city is generally dingy and generally poor.

Looking at the list, I have a real problem believing that cites such as Milwaukee and Columbus, Ohio are high crime spots whereas El Paso and LA are low crime locales. Let's take this with the proverbial grain of salt, and work on making San Diego law enforcement more effective and do what we can do to make the metro area as liveable as possible.