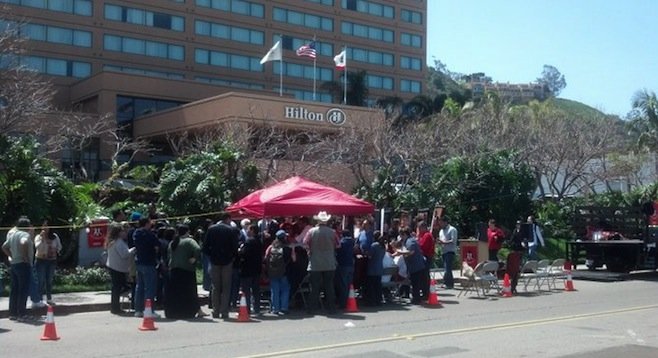 Hunger strike ends, though no resolution in sight

About 50 supporters gathered outside the Hilton Mission Valley yesterday afternoon (April 9) to congratulate the self-styled “San Diego Nine” as the group ended a public five-day hunger strike protesting a decision by new ownership at the hotel to make continued employment contingent on existing employees passing a check through the E-Verify program, which validates a foreign employee’s right to work in the United States.

The strike began last Friday, after Newport Beach-based Evolution Hospitality said it would rescind layoff notices to 110 workers but run E-Verify checks, which nine workers were unable to pass, some of whom say they have worked at the property for as many as 7 years. 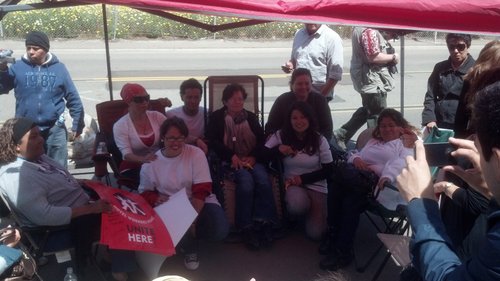 The current labor dispute at the property is just the latest in a string of similar events. Last August, a group of workers charged the former hotel operator, Conneticut-based HEI Hospitality, with wage theft related to denial of mandated break periods and involuntary off-the-clock meetings. None of the openly hostile tactics employed by Hilton at a previous press conference were evident toward the gathering on Tuesday.

During the strike, Congressman Juan Vargas, Mayor Bob Filner, and city council president Todd Gloria were among those who appeared to speak in favor of comprehensive immigration reform, and a contingent appeared before the city council on Tuesday to give testimony supporting a resolution from Councilman David Alvarez calling on Congress to act on the issue.

Neither hotel management nor labor groups backing the strike have announced any change in the employment situation for the nine.