Unusual, much-arrested and disbarred attorney Michael Theodore Pines failed to appear for two court hearings in a row, and yesterday a San Diego Superior Court judge ordered him arrested on a no-bail warrant.

In his most recent courtroom adventures, Michael Theodore Pines, 60, admitted making a written threat to extort money, a felony. In the same plea deal, signed last August, he also admitted practicing law while suspended from the State bar – and committing this new felony while released on his own recognizance for the same offense, which he had admitted in an earlier plea deal.

In the August 28, 2012 plea deal, Michael Theodore Pines also admitted misdemeanor trespass. In that instance, Pines appeared to have joined a former pro-football player who went onto a Rancho Santa Fe estate which the athlete owned. Robert Otis Griffith, 41, once a star for San Diego State University’s football team and an NFL player as recently as 2006, did plead no-contest to trespass. In that case, the prosecutor stated Otis got bad legal advice which resulted in his unlawful activity, the trespass. The Rancho Santa Fe estate had become controlled by bankruptcy trustees and then a dispute developed between Otis and persons who lived on the property as tenants, according to witnesses who testified for that matter, last summer.

After his most recent plea deal, Michael Theodore Pines was released on condition that he wear electronic monitoring and “receive appropriate medical attention at appropriate facility.”

Pines’ mental competency has been questioned in past, by various judges in San Diego County.

Speaking on the record, in the courtroom, Pines is fond of positioning himself as a champion of persons in danger of losing their homes, and he often mentions conspiracies involving banks and persons in position of power. Pines appears unafraid to threaten legal action, even against other attorneys who had the temerity to represent him.

Michael Theodore Pines was a failure-to-appear at two hearings, on September 26 and again October 9, and Superior Court Judge K. Michael Kirkman ordered a no-bail warrant for his arrest yesterday.

M. T. Pines could be sentenced to 4 years and 8 months for offenses he has already admitted, according to paperwork in his court files. 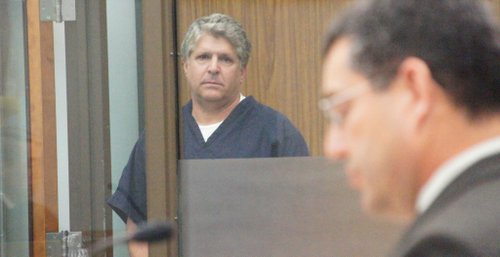 Why is he adimitting crimes, in his plea deals, if he truly believes there are people conspiring with the gov-which there no doubt is???

Take it to trial you wimp. Stand up if you truly believe what you claim to believe, tell the jury, let them make the call.