When a woman reported that her ex-boyfriend was threatening her, Escondido police tracked him through cell-phone use to a trailer park – the man appeared to be lurking near the mobile home where the woman lived with her mother.

It was after midnight, in the early morning minutes of Feb 9, 2012, when police confronted Sergio Alejandro Lopez.

Lopez drew a handgun and fired two shots at police, but officers did not return fire, according to a statement released by Escondido police. No person was struck by any bullet. The SWAT team and Emergency Negotiations Teams and a helicopter and other police agencies responded, and despite hours of searching, the suspect was not found in the area.

After some hours, Escondido police released a statement saying they were “seeking the assistance from the public in locating Lopez” but “do not try and contact or detain Lopez as he is believed to be armed and extremely dangerous.”

Three months later, 25-year-old Sergio Alejandro Lopez was handed over to U.S. Marshals by Mexican authorities, that was on May 9, 2012. Lopez is said to be a U.S. citizen.

Last month, Lopez went on trial. He faced seven counts, including assaulting a peace officer with firearm and making criminal threats and disobeying a protective court order to prevent domestic violence. This is a third strike case so Lopez could face life in prison.

Lopez is described as a “documented” member of the West Side Gang, with “WSG” tattoo’d on his neck, and his moniker is “Downer,” according to police records. Court records for Lopez start in 2005, the year he turned 18 -- he admitted meth possession and resisting officer and was immediately released on unsupervised probation.

A week after his release, Lopez beat and stabbed a man in Escondido -- the victim had the nerve to report his car stolen, according to police. “Downer” admitted personal-use-of-a-knife-during-assault in a plea deal. Although he accepted a 4-year-prison term in that deal, signed in October 2005, Lopez was out on probation in 2006. In April of that year, Lopez was charged with assaulting two persons with a baseball bat. He admitted using the baseball bat on one person, and got another 4 year prison sentence. In 2010 he was charged with felony domestic violence, that was reduced to a misdemeanor in a plea deal.

Yesterday a jury declared Sergio Alejandro Lopez guilty of negligent discharge of firearm and felon in possession of firearm and misdemeanor resisting arrest -- these offenses committed in "Downer's" most recent brush with Escondido police, the confrontation in the trailer park last February.

Defense attorney Andrew Limberg suggested that the jury may have been persuaded that Lopez and his girlfriend had one of those relationships with a lot of “drama”-- because the jury declared him not-guilty on both counts related to threatening her. The jury also refused to find Lopez guilty of the most serious charge, assaulting an officer with a semi-automatic weapon.

Defense attorney Andrew Limberg said he spoke to two jurors after the verdict. He reported they were not convinced Lopez took aim and fired while he was running away, as some witnesses testified, instead they felt it was more likely Lopez unintentionally fired his handgun while fleeing. 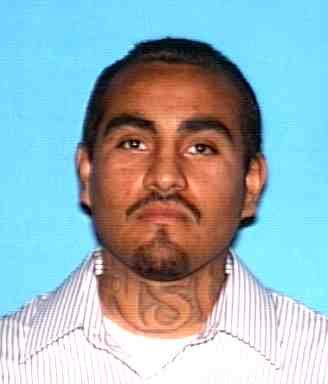 Got cleared of the most serious charges, the two other felonies are serious, as all felonies are, but in the grand scheme of things he did pretty good. He will not be facing 25-life.