After a record-breaking political spending year, San Diego mayor-elect Bob Filner is still out looking for the big money, and as a newly sworn in incumbent, city hall observers say, he's likely to get at lot more of it.

On December 6, three days after he becomes mayor, Filner's campaign committee is throwing a two-tiered reception, co-hosted by Lorena Gonzalez, Secretary-Treasurer and CEO of the San Diego and Imperial Counties Labor Council, AFL-CIO, and Mel Katz, the ultimate downtown establishment player who's been chairman of the San Diego Regional Chamber of Commerce and the San Diego Convention Center Corporation. 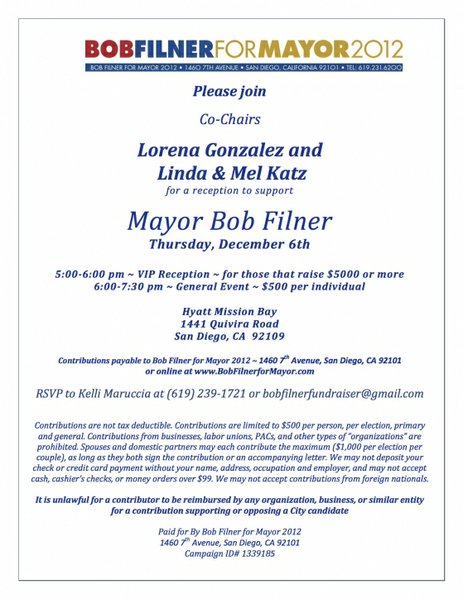 Katz, a one-time member of the chamber's "education roundtable," was also a key political backer of onetime city schools honcho Alan Bersin in his perpetual battles over education policy and privatization. Katz's wife Linda is also listed as a co-host.

The event is to be held at the Hyatt Mission Bay.

Isn't Katz also the head of the Library Foundation that raised bucks for the new Central Library downtown -- the group that had to schnorr $20 million from the School Board's Prop S bond issue on the pretext of including a charter school in the project? Wasn't the Library also an AFL-CIO Labor Council priority for Lorena Gonzalez? Didn't they just hold a thanks-and-farewell party for Mayor Jerry Sanders at the site featuring Karl Strauss beer?

I hope this fundraiser is more about GOP operative and campaign consultant Tom Shepard than liberal Dem Mayor Bob Filner.

If anyone had hopes that Filner was going to bring some new thinking to the mayor's chair, this could provide an early warning that nothing much will change. Both the unions and the local corporate welfare/developer cabal are lining up to help him pay his campaign debts, and he'll trade one set of debts for another. Once he's out of hock, he'll be in hock even deeper to those who helped him out. Not saying that the opponent would have been any different in his own way, but money talks at city hall, even if nobody else is doing anything at all. If you're waiting for reform at city hall, you'll likely wait a very long time to see reforms in city employment policies or pay levels or productivity. Filner isn't the guy to shake things up. He'll just quiet them down as much as he can and continue business as usual.

I cannot recall the last time a dem was Mayor.........maybe I am just getting the parties mixed up, but was Mayor Mo a dem?? I will say this, anything will be an improvement over Sanders, he was a disaster IMO.

Lorena Gonzalez is a licensed lawyer....I find her current job sort of odd with that background......

Yeah, I has been so long I couldn't rememeber. I had a meeting with her once. I wanted to meet the Mayor AND the Police Chief, which was Kolander, and it was impossible to have sit down with Kolander, and by a stroke of luck Mayor Mo met with me, for 5 minutes, and she was useless.

You folks have a lot to learn. One of the first things Maureen O'Connor did as Mayor is to hold a joint fundraiser with her opponent, conservative Republican Bill Cleator. It was a gesture to show there were no hard feelings between the two, especially because Cleator still had two years to serve on the City Council. As a congressman, Filner is used to getting hundreds of thousands of dollars as campaign contributions, but that hasn't stopped him from doing what he thinks is right. So, this pocket change from Mel Katz will not have one iota of affect on what Bob will do or how he will do it as Mayor. You should see how it's done in places like Chicago, New York & Boston. Whatever is raised by this event would be "walking around" money in one of those places. Grow up.

Whatever is raised by this event would be "walking around" money in one of those places. Grow up.