A Better San Diego Forum Attacks Props A, B

A Better San Diego held the latest installment in its monthly series of community forums Friday morning. The organization, backed largely by labor groups, invited Tom Lemmon, business manager of the San Diego County Building and Construction Trades council, and Michael Zucchet, general manager of the San Diego Municipal Employees Association, to speak against city Propositions A and B.

Zucchet took the podium first to argue against Prop B, which has been widely been touted as a means to save the city money by enacting a five-year pay freeze on pensionable salaries for existing employees and by directing most new city hires into 401(k)-style savings plans instead of defined benefit pensions. Proponents have argued that the measure could save the city nearly $1 billion, a claim countered by opponents by pointing out that all of the savings come from the pay freeze, and that the 401(k) plans would actually be more costly than the existing pension plan.

But the pay freeze itself is not guaranteed, it simply dictates a starting point for the city to open negotiations with its union employees. Zucchet and others believe that such a mandate may even be illegal, and challenges to the measure are already being prepared.

“There’s litigation that’s already been initiated, and there’s a relative mountain of litigation that will be initiated if it passes at the polls, because the way this was done violates state law in a number of ways, particularly as it relates to bargaining laws in California,” says Zucchet, who believes that opening negotiations with a predetermined mandate constitutes a failure to bargain “in good faith.”

An article published in CityBeat last September contains statements from a spokesperson for mayor Jerry Sanders that suggest the initiative was intentionally structured to avoid otherwise required discussions with the unions, something Zucchet suggests might be evidence of bad faith on the part of city officials.

Speaking on the city’s budget woes that Prop B aims to ease, Zucchet cited a Center on Policy Initiatives study that allegedly found revenues were artificially low due to the city having the lowest effective tax rate in the state.

“If you were to take the average tax structure of the ten largest cities in California and apply those rates to San Diego for hotel taxes, business license fees, and everything else, San Diego would immediately generate another $200-300 million in tax revenue per year,” says Zucchet, alleging that reduced taxes caused the need to intentionally underfund the pension system that created the current shortfalls.

Zucchet further attempted to debunk the common perception that large numbers of union employees were retiring with six-figure pensions, something that independent mayoral candidate Nathan Fletcher called “immoral” at a debate last month while running as a Republican. Zucchet said that Prop B proponents had used pension payments of non-union management employees not subject to the collective bargaining agreement in question to skew the public’s perception of typical pension benefits. Specifically cited were the positions of deputy city attorneys and city managers.

“The average employee we represent earns $53,000 annually, and the average pension of a non-public safety worker after working 30 years for the city is $31,000 annually with no Social Security,” said Zucchet. City workers gave up their Social Security during bargaining in 1982. “Reasonable people may agree or disagree whether those levels of compensation and retirement benefits are good or bad, but those are the facts.”

Ultimately, Zucchet acknowledges that supporters of the measure have had much more success in getting their message out and enjoy a considerable advantage in public opinion. A poll published in U-T San Diego in late March showed Prop B garnering support from 56 percent of voters, with only 30 percent opposed.

“From a political standpoint, it’s pretty likely that this is going to pass in June. And when I say pretty likely, I mean we’re [expletive].”

Lemmon spoke against Prop A, which seeks to ban the use of project labor agreements in the city — similar measures have already passed in the county and in cities such as Chula Vista and Oceanside.

Such agreements are typically entered into on large construction projects and are frequently used on both government and private projects. They dictate the terms of work, including timelines, budgets, and employee compensation, with the party contracting for the work receiving the benefit of a firm budget and a guarantee of no work stoppages. The downside, detractors say, is that such agreements require workers to receive union-level pay, even if the contractor bidding on the work does not typically use union labor or pay workers at the usually higher rate of compensation.

“Who’s really putting the initiative together? It’s a group of contractors, the Associated Builders and Contractors, who only represent four tenths of one percent of the contractors in California. Yet they’re responsible for 24 percent of all the state-law violations that occurred in 2010,” charges Lemmon. “So they don’t like to play by the rules, and project labor agreements make them play by the rules.”

Lemmon points out that enacting such a ban could cost the city a large amount of money, even though without the ban in place no projects are currently being pursued under the use of a project labor agreement.

Senate Bill 922, signed into law last year, prohibits local municipalities that have blanked project labor agreement bans in place from receiving state funding for construction projects, though there is no requirement that cities actually entertain the notion of entering into such an agreement. Last year San Diego received $158 million in state construction funding. 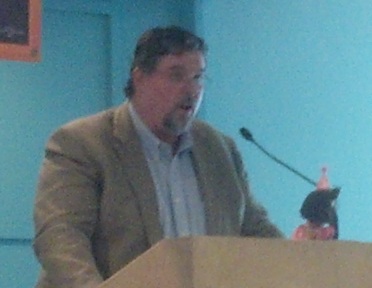 “The average employee we represent earns $53,000 annually, and the average pension of a non-public safety worker after working 30 years for the city is $31,000 annually with no Social Security,” said Zucchet

No kidding Sherlock, Public Safety accounts for over 80% of the $100K pension scams.

They can stick a fork in the public trough feeder unions, they are done. These measures are going to pass by a 3-1 margin. 4-1 if the public employees are not counted.

Dave, the Center on Policy Initiatives,which you mentioned in your story but didn't otherwise characterize, is another pro-labor union group.

"The Center on Policy Initiatives is a nonprofit research and advocacy center dedicated to the interests of working people in the San Diego region. Through research, community organizing and public education, we seek policy changes that promote economic justice and strengthen the middle class."

Also, you soft-pedaled your description of A Better San Diego, which describes itself as "a community affiliate program of the San Diego and Imperial Counties Labor Council." So ABSD is not merely "backed largely by labor groups," it is a labor group.

Whether they go by A Better San Diego, the Middle Class Taxpayers Association or the We Party Patriots, these labor groups are singing from the same hymnal.

Surprise, surprise! Organized labor, which rode roughshod over local governments for decades doesn't like these proposals. Frankly, I don't care how the savings are realized, freeze or new retirement plans or anything else. The local voters here are not going to willingly pay those who serve them far better than they are paid, and they REALLY resent the uber-generous retirement plans that they can only dream of. It is time for the public servants to understand that they cannot expect to earn double the median income of regular working people, and retire at age 50 at as much as they earned while working. So simple, yet these guys can make it sound as if poverty for public employees is just around the corner.

"The Center on Policy Initiatives is a nonprofit research and advocacy center dedicated to the interests of working people in the San Diego region. Through research, community organizing and public education, we seek policy changes that promote economic justice and strengthen the middle class."

The CPI says this too;

Despite strong economic growth, San Diego suffers from chronic underinvestment in basic public services and infrastructure ranging from fire protection to library services. The region’s anti-tax fervor has led to fiscal irresponsibility on the part of local governments that neglect public services essential to the daily and long-term needs of people and businesses. CPI’s 2005 report, The Bottom Line, revealed that San Diego is one of the most under-resourced metropolitan areas in California. Despite strong economic growth, the City of San Diego failed to collect revenue routinely raised by other cities, and cannot adequately fund basic services. Continued failure of the City of San Diego to address its structural budget deficit was documented in CPI’s The Bottom Line —2010 Update. The data show that San Diego continued to lag behind other large cities in California in most general fund revenue sources, including property tax, sales tax, transient occupancy tax, trash fee/tax and business license fee/tax.

One thing they left out were the multi million dollar retire at age 50 pensions. I wish they would address that in the same way they address the muni taxation issues.

I continue to be baffled at the media's support for and protection of Big Labor. There was a time in this nation when backdoor deals like Government Mandated, union-only Project Albor Agreements and anti-Democratic policies like The Employee No Choice Act (Card Check) were exposed, not supported by the media.

The idea that the media in this case supports the continuance of unsustainable retiree policies and the the allowance of labor agreements that disenfranchise 85% of the construction workforce just proves that Big Media knows it is a dinosaur and has gone to live with the other relics of a bygone period by supporting those ancient and irrelevant organizations in their effort to return America to what it perceives as the Golden Age of America. In the 1950's America was flush with a recovered economy, plenty of manufacturing jobs and a bounce in support for unionism. Few in the world had any interest in taking jobs away from America and even if they tried, they failed.