There exists only one psychological/semantic image in my mind for a cookie jar. I'm not even sure what any other cookie jar would look like, as none of my siblings or I have ever owned one. For us, a cookie jar is synonymous with "The Pig," a ceramic jar in the shape of a pig standing upright, dressed in evening clothes and a top hat, which my parents received as a wedding present years before any of us were born. It was a part of the family possessions and one of those things so familiar that we'd take it for granted without a lot of thought. We could lift the head off by the enlongated snout or by the top hat, and find the cookies in the body, from the knot of the necktie to the feet.

The cookie jar had only three resting places in its entire existence as a family heirloom. For the first years of their marriage, it sat somewhere in the little apartment my folks rented on Reno Drive, near The Tower Bar off University Avenue. It then got moved with their other possessions to the little house on College Avenue, above University, that they bought in the early '50s. Then, on Veterans' Day 1965, it was packed and carefully moved to our new house on Seminole Drive, behind the old Campus Drive-In.

We never imbued The Pig with any sort of personality; it just sat there smiling contentedly on the counter with a varying number and variety of cookies inside. It never seemed to care about the happy moments, the celebrations, the fights and arguments, or even the eventual passing of my parents. Yet we were always aware of it. On College Avenue--which in the '50s and '60s had no sidewalks--the two great tabooes for the three kids were that we should never under any circumstances step into the busy street unescorted by an adult, and that we must never, ever, damage the fragile cookie jar by setting the head down carelessly or--God forbid--dropping it.

Nonetheless, when dad passed away last June I discovered to my surprise that one of the folks apparently had dropped it at some point, probably long after we kids had grown up and moved away. There was a crack on the back of one ear, not visible if the jar were facing forward, a slight chipping on the front of the top hat, and also a small piece broken away on the lip of the top section that lay against the rim of the main body. It had been patched with scotch tape, which was now looking a bit worn and frayed.

When planning the estate sale, we siblings faced that great difficult life decision of what to get rid of and what to keep. My sister isn't particularly sentimental or attached to such things, but she took a few items that included some of the hundreds of wood, metal, and ceramic giraffes that dad enjoyed collecting. For my own part, though I own several good sized rental properties, each with storage sheds where I keep gardening tools and such along with a few personal items as decorations, my own living space is a very modest condominum along University Avenue on the edge of my old neighborhood. I kept a large ceramic giraffe that was almost as old as the cookie jar, a metal cooler from the '50s that I'd restored with the original "Seven-Up" logo a decade or so before, and most of dad's WWII memorabilia; his ID tags hang next to mine on the opposite arm of a nutcracker grenadier I picked up in Germany years ago during my own military service.

The rest of the stuff, mostly the kind of junk you can find in any thrift store or garage sale--though some items made me pause to think they'd been in the family as long or longer than I--vanished through the auspices of a fellow with an estate service that dad had met a couple of years before when his next door neighbor had passed.

Now only the cookie jar remained. My brother expressed an interest in it, but during trips down for my dad's memorial service and later for Thanksgiving, he was reluctant to carry it back to his home in Reno on the plane. I agreed to keep it in storage at my little condo, and bring it along on my next trip to visit them by car.

The opportunity finally came earlier this month, when I set out on a two week two thousand mile road trip. I often do this in the late spring and early summer, after classes have ended at the community colleges where I teach. It usually involves stopping in to visit old friends, and some time spent maintaining my rental properties in Arizona.

The Pig traveled in two parts, the body sitting on the passenger side floorboard of my trusty Honda Element and the head facing me in the passenger seat. As it's been for my entire life, I was cognizant that it was there and careful not to damage it, but otherwise it was of no particular interest or relevance to the things I was doing. For its part, The Pig maintained his contented smile and didn't seem to mind a thing.

It sat in the car during the four days I worked on the rentals, taking care of a rodent problem in a storage shed and some termite damage to a carport. Heading north from Prescott, I drove over seventy miles on a well-maintained but still rather bumpy dirt road until I reached I-40 east of Kingman.

Enroute to Las Vegas to visit an old friend I hadn't seen in 16 years, since my departure from a long time teaching job in Japan, I drove over Hoover Dam and parked in a lot that not many people seem to know about, figuring the place couldn't have changed much since I'd last seen it in 2006 until I noticed the bypass bridge--built between 2005 and 2010--spanning the canyon. I walked across the dam to the Visitors Center to read a bit about it, impressed once again with the Art Deco restrooms on the dam with their brass doors and black and turquoise tile, seeming like overblown monuments to man's unceasing need to relieve himself.

The Pig sat patiently and waited for me.

There was a nice weekend visit with my friend and his family, then a late night drive through Death Valley, where I stopped at the parking lot at Badwater around midnight and slept in the back of my Element with the tailgate down, after a stroll in the full moon way out into the valley beyond the wooden walkway.

I was out of the valley before 8 AM, and skirting Owen's Lake enroute to Tioga Pass and a drive through Yosemite to visit another old friend from my days as a teacher and student in Peru. The pass closed behind me and I found myself driving in a snowstorm, with cars in both directions spinning out and coming to rest against trees on the roadside. Despite being a native San Diegan, I've come to know a bit about driving in snow. I kept my cool and so did The Pig.

On the last night before arriving in Reno, I spent the night at a campground overlooking Emerald Bay on South Lake Tahoe. Then--for the first time--it occurred to me that The Pig was getting quite a grand tour, considering it had never been outside a radius of a couple of square miles in San Diego during its entire "lifetime."

My sister-in-law was home when I called from the outskirts of Reno, and I made my way to their front door with the two parts of The Pig in each hand. One of my first comments was that it probably would have been easier to just carry it with them on the plane. She agreed, but we also agreed that it was one of those things my brother just would have disagreed with. At any rate, The Pig had found his new home.

During a pleasant visit, we washed their new cookie jar and re-patched the crack with fresh tape. I borrowed a marker pen and covered over the thin tiny chip in the top hat. Then we filled it with several kinds of cookies, and several times stopped to look at it sitting there on their kitchen counter, marveling at the wonder of it all.

The trip home was relatively uneventful, and I pulled into the parking lot on an early Sunday afternoon. The very first thing I saw was an old childhood friend, now long homeless, digging through the dumpster of my condo complex with his girlfriend. They'd come to dad's service last year staggering drunk, and made quite a spectacle. It had genuinely infuriated my sister, but I'd handled the situation gently and most people later found the incident humorous if a little sad. Just the same, since then they haven't exactly been people whose company I've sought.

He came up to chat before I'd shut the engine off, and I told him I was just returning from Reno and a visit to my brother. He asked how my brother has been, and I mentioned that I'd taken along the family cookie jar to give to him.

"Oh yeah," he replied without the smallest hesitation, "The Pig."

Glad to see him or not, I had to admit at that point that we undoubtedly share quite a bit of background information and more than a few pleasant memories. He asked if he could borrow a couple of bucks, but all I had was a twenty. I gave it to him and don't expect to see it again, but that's alright. 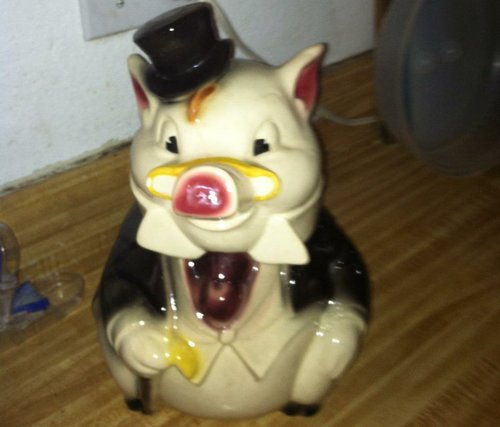 all pigs and pig images are endowed with great charisma...ur pig is dripping with it kstaff...hahahahahahaha

especially the ones that can dance

i love ur writing homey