Never in the Future that Dawned Earlier On, a new collection of songs from experimental, minimalist art rockers Gunther's Grass, has just been released on Marcelo Radulovich's local Titicacaman label. "The stuff was recorded in 2005 and 2006 at my studio and has been sitting around in my hard drives, so time to get it out there," Radulovich tells the Reader.

"The music is instrumental, atonal at times, beautifully harmonious at others. The stuff is hard to classify and for the most part, acoustic and unprocessed, plus carries a brain twisting title to boot...it's really cool and original music, droney and all instrumental, totally exotic and psychedelic in the best possible way." 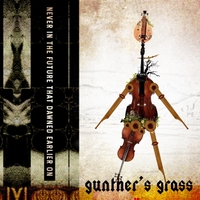 "I'm playing a hurdy gurdy, and Christopher Adler, who teaches at USD and is a fantastic composer and player, plays the khaen, which is a bamboo instrument from Thailand that has a very particular sound. The two of us are in every track, some of the other pieces feature UCSD teacher Charles Curtis on cello, Scott Walton on bass, another heavy musician, and Marcos Fernandes on tamboura box, a drone generator from India, on one of the tracks."

Gunther's Grass began in 2005 as a collaboration between Chilean-born audiovisual artist Radulovich and Christopher Adler to bring together two ancient drone-based instruments from across the world: the medieval European hurdy-gurdy and the Lao/Northeast Thai mouth organ khaen.

Acknowledged internationally as a performer of new and experimental music, cellist Charles Curtis has been closely associated for over 15 years with the legendary avant-garde composer La Monte Young. As director of Young's Theatre of Eternal Music String Ensemble, Curtis has participated in more performances and premieres of Young's works than any other interpreter. For a number of years, he has maintained an interest and a presence in the downtown New York free music scene, performing in clubs like Tonic, the Knitting Factory, the Cooler, ABC No Rio, CBGB, and Acme Underground.

Gunther's Grass has also featured bassist and pianist Scott Walton, who rose to local notice as a member of the local experimental music proponents known as the Trummerflora Collective and with the band Cosmologic. His CD Venice Suite features Gilbert Isbin and Jeff Gauthier, and other recording projects include Harris Eisenstadt's The All Seeing Eye + Octets tribute, the Tracy McMullen Quartet, and a jazzy trio with Nathan Hubbard and Erik Griswold.

Radulovich formed his San Marcos-based MP3 label Titicacaman Records in 2010, in order to release his solo albums Dear Annex and Summer in Winter. Two videos from Dear Annex were uploaded to YouTube; one for “Girls on the Staple Line,” the other for “Rainbow Moo Moo,” with a third video later created for the title track using archival footage of mental patients in the 1940s.

His album Legends & Robots was released in April 2011. The following year, a new video was released for the title track of his Dear Annex full-length, depicting a strange and hypnotic grey old dream, featuring archive footage of mental patients in the 1940s. Late 2012 saw the release of La Mano Ponderosa, recorded using only an iPod and various apps, along with his vocal tracks.

Never in the Future that Dawned Earlier On can be found at http://www.cdbaby.com/cd/gunthersgrass, as well as iTunes, Amazon, and the usual online digital platforms.

Radulovich will be appearing on Sunday, March 3 at the Void (formerly Eleven) in City Heights. "The show, organized by Miss Heather Brosche, features rare appearances by some very talented people from south of the border, and I'll be presenting all new material," says Radulovich.

Reader columnist Chad Deal has a preview of the event at http://www.sandiegoreader.com/weblogs...