I was tempted to go mellon collie when, several weeks ago, Ruby Room co-owner Brittni Cute confided that she had news about the venue.

Due to creative differences between owners, Brittni and her husband Sean Cute would be selling their shares in the bar and taking the Ruby Room elsewhere. 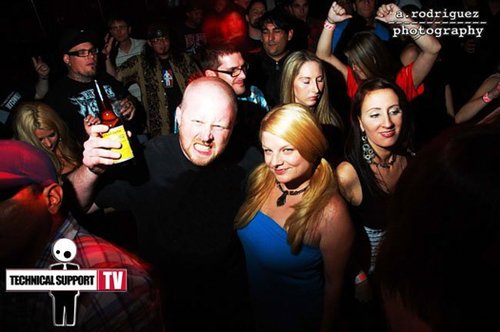 Sean and Brittni Cute are taking the Ruby Room to an as-of-yet unannounced location.

“Nothing lasts,” I lamented to my beer, cursing myself for being such a complacent patron since I moved away from Uptown last year.

Perhaps it was foolish to assume that the quirky Hillcrest landmark would be there forever, or long enough, at least, to buy my 8-year-old nephew his first legal beer and introduce him to the wonders of jungle music, experimental rock bands, and precariously thrifty booze specials.

Looking around, the bar’s cavernous interior took on a nostalgic glow as I gazed upon its art-strewn walls and sparkling taps as if they were the sensuous nozzles of a love already lost.

“I never knew you enough,” a mewed to my elusive Ruby Room. “You were too beautiful for this world.”

But that all changed moments later, when Sean poured me a shot of Jameson and, with a look of child-like wonderment glowing in his eyes, told me that great things were on the horizon.

“I can’t tell you much yet,” he said, grinning from behind the bar, “but I’m excited about it.”

The Ruby Room officially announced their departure with a press release today.

Not much is known about what’s next, but if the past 5 years, 1500+ shows, 19 parking lot festival, 3 CityFests, and countless art and charity events are any indication, it certainly should be something worth looking forward to.

“This isn’t goodbye,” Sean says. “This is reincarnation. The body is still there, but the soul of The Ruby Room is moving on to take new form”.

The Cutes have already started shopping for new locations for their next project in the San Diego area.

“Live music and art is who we are, and you will be sure to find a bigger and better version of this with our new project. The talent in San Diego is vast and we feel so fortunate to be a part of it,” says Brittni.

The Cutes would like to personally thank the community of San Diego, the fabulous neighborhood of Hillcrest, the Hillcrest Business Association, all the artists, musicians, non-profits, promoters, patrons, journalists, friends, neighbors, and staff that have passed through the doors of The Ruby Room.

“It takes involvement from everyone to make a creative project of this magnitude happen. This has been an extremely exciting chapter in our life,” says Sean.

Sean will also be stepping down as Secretary of the Hillcrest Business Association, though he plans to re-join following the opening of the new location.

“Giving back to the community that I was a part of even before we opened The Ruby Room is a high priority. Our neighborhood is definitely something special.”

Although the Cutes have left, The Ruby Room name will change around mid-July.

Former business partner Paul Joseph Smith is lessening the bar's focus on art and music and will be re-branding the location as a local tavern called The Merrow.

Artists themselves, the Cutes have a few side projects brewing for the summer months.

Sean is currently working on a self-penned book about the experience and exploits of owning a rock venue titled What the Hell Do I Know.

Brittni will be giving her abstract photography career - which has spanned New York, LA, London, and Milan - a resurgence.

Sean and Brittni Cute photo by A. Rodriguez

Sean and Brittni managed to make the Ruby Room a mecca for local illustration artists, as well as music performers, by hosting countless art shows (including the Reader's own month-long Overheard & Famous in San Diego comic strip art installation). Here's hoping they keep their fingers in the paintpot wherever they wind up with their next local business venture --