Ariel Levine wants to be an Elvis impersonator. No, not that Elvis.

Pump it up when you don't really need it. Pump it up until you can feel it.

"It's a big risk, doing the Costello thing, but I feel very positive about it." Guitarist Ariel Levine, of Ocean Beach by way of New York City says he plans to launch an Elvis Costello tribute band in the near future.

The Distractions: A Tribute to the Other Elvis are Bill Horvath on bass, Josh Weinstein on keys, and a drummer who simply goes by the name of Rex. Levine himself will handle the role of Costello.

I personally have never known quite what to make of Elvis Costello. Born Declan Patrick MacManus in England in 1954, he seems like all of the other Brit invaders in that he borrows freely from American icons.

Costello, Rock and Roll Hall of Famer that he is, simply has no genre to call his own. He's all over the creative board, from punk to horn-band soul and everything in between. Which Elvis will Levine pay tribute to?

"All of them," he says over coffee in OB. "The entire Elvis era, from start to finish."

I should think this music chameleon- esque aspect of Costello's career would represent a significant problem for any Costello tribute act. Possibly this is why there are a relatively scant few: Oliver's Army, The Costellophones from Austin, Bobby Richards and the Unattractions, the Detectives, to name some of them.

San Diego's Ballad Mongers, by the way, have been doing a smashup version of "Pump It Up" for the past 20 years.

"If someone's gonna go to see our show, they're obviously a fan and they're gonna know every song. You have to at least play all his hits, from 1977 to 1982."

Levine's done Elvis Costello tributes before he says, back when he was still living in New York and playing with his band Kindergarten.

"We did two tribute shows at Joe's Pub. There were burlesque dancers there too, doing their burlesque thing along to Elvis songs."

When Levine moved here a year ago, he found work first as a hired guitar in Maren Parusel's band, then later as Malcolm Young in an AC/DC tribute group. But can he pull off the Elvis Costello look?

"I throw on the glasses and the suit. I've studied his moves. It's all about muscle memory, I think. My voice doesn't sound like his naturally. There's three or four steps that are in his voice that I try to remember. He's also very percussive. I do that naturally. He has a smoky tone that I have to strain to get. And, he's got some weird pronunciations."

Is there any acting involved in the tribute thing? I want to know because the tribute bands I've seen range from near to far in their approximations. "Yeah, I kind of get into character when I do him. Sometimes I break character, and I have to remind myself that I'm playing someone else. I dunno," says Levine. Otherwise, he only vaguely resembles MacManus/Costello.

"I did Angus in an AC/DC tribute in New York and I don't look a thing like him," says Levine. "But, I acted like him." 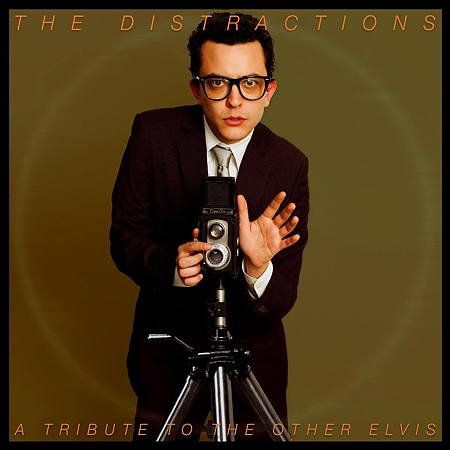 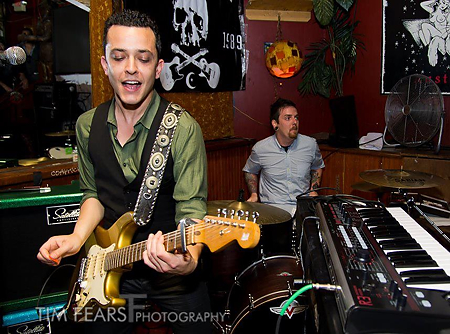 Levine as Levine, at South by Southwest