The Tallest Man in Elfin Forest

"I grew up in a place called Elfin Forest. It's kind of between Stagecoach Park in La Costa and the Escondido Auto Park." Josh Ottum, 34, is on the phone from the campus of UC Irvine where he is completing the requirements to get his master's degree in music.

"They had a little magical sign with these gnarly Lord of the Rings letters that said Elfin Forrest. I was in the second grade when we moved there. I remember the first neighbors that came and knocked on our door. They were unusually short -- the whole family."

Whatever the source of Elfin Forest shortness, it was not environmental. Ottum grew to be 6'3".

The singer/songwriter moved to Portland before going back to college. He says he relates to the musical aesthetic of the Beach Boys. "And, pretty much anything from the old Reprise Records label of the 1970s." This would be Neil Young, Joni Mitchell, and so on.

When I call, he is in last minute preparations for a project he's doing as part of his class requirements. It is billed as SMaRT/dUMb: A Concert of New Music by Josh Ottum. "I wish you'd reached out earlier," he laments. He says exactly what it is he is receiving his master's degree in. It sounds very complicated. It flies right over my head. I am too embarrassed to ask him to repeat it.

Irvine otherwise has been good for Ottum. For one, he is not alone. "The Mattson twins [Mattson2] are up there too." The brothers recently graduated from UCSD and were likewise accepted into the master's program at Irvine. "We connect all the time." And, Ottum has access to a stream of willing participants and tools of the trade with which to orchestrate his student compositions. "I have access to all of these instruments and more players than ever."

For example, an idea came to him once to replace the instruments of rock, such as electric guitar, bass, drums, and keys with classical instruments like bass clarinet and so on. He took it a step further and assigned each instrument a single note in a chord. In the end, he says, he found that instruments like flute and violin are just as rhythmic as percussion instruments, some of which he learned by speaking with Van Dyke Parks.

Parks, a composer/producer/arranger is possibly best known for his contributions as a lyricist on the Beach Boys album Smile.

"He spent a lot of the time he spoke to me being quite technical." Possibly this was Parks' take on Ottum's gig. But when Ottum plays the Casbah in May it will be simple -- just him on solo guitar. "And that's it."

He's done this solo guitar thing now three times in Europe on different tours there and in Encinitas, where he played at Miracles Café. Ottum's indie pop has since been featured on MTV, Mad Men, and NPR. He's had a month long residency at the Tangier Club in L.A. His second full-length, Watch TV was released last summer.

Of the solo guitar set he says this: "It ends up being real intimate. I was sandwiched between two rock bands at the Soda Bar once and when I played, the place was dead silent. That was the plan. That's the way to do it. I hit single notes on guitar, and the dynamics mean something." 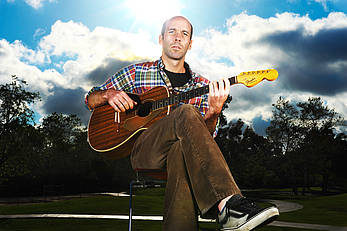