"This," Bill Yeager says, "will probably be the biggest event in the history of the SDSU Jazz Studies Program." Yeager plays jazz 'bone, and he's an educator. For the past 27 years he has been the director of jazz studies at San Diego State University.

He's on the phone talking about the concert he's planning in celebration of the 75th anniversary of SDSU's School of Music and Dance. 60 musicians will perform including what Yeager calls his "best jazz ensemble and an all-star faculty group. It's pretty exciting. When you look at the list of names, so many of these guys are at the forefront of the jazz music scene in San Diego."

From 1977 to 1987 Yeager and Helzer ran the Los Angeles Jazz Workshop. At the time Yeager lived in the San Fernando Valley. He flew himself to and from San Diego in a Cessna 172. It was expensive, but flying had its perks:

He says he sold the airplane when he got married and moved to Carlsbad. "There's not much I want to get away from now."

I wonder out loud to Yeager about the notion of running a jazz program in a field of diminishing returns. On a commercial level, jazz is a hard sell. In 2008 the number of adult Americans that attended a jazz performance fell to 7.8% in a National Endowment of the Arts survey. The median age then was 42.

"These numbers," wrote Terry Teachout in the Wall Street Journal in 2009, "indicate that the audience for jazz in America is both aging and shrinking at an alarming rate."

Aside from a scattering of local jam sessions the quality of national touring-level jazz offerings available in San Diego has grown downright anemic. Dizzy's is currently homeless. The Athanaeum Jazz series at the Neurosciences Institute in La Jolla is on a short leash due to a sudden and unexpected increase in overhead. Jazz in the Park did not survive the transplant to North Park.

And now comes the news that the once-popular Jazz 88 Ocean Beach Music and Arts Festival will skip this year for lack of funding.

How does academia justify the running a school of jazz in such a climate?

Yeager lets out a loud exhalation and then says this: "Everybody finds their way. It doesn't mean that people [graduates] are going to be going exactly what they think they are going to be doing."

Grads from SDSU's music studies, he says, seem to do well in life no matter what they land up doing. He thinks that music studies improve one's intellect.

"Music has something to do with synapses." He laughs.

But Yeager also retains a sense of commitment that aligns with the preservationist side of the argument.

"In 1987," Teachout wrote, "Congress passed a joint resolution declaring jazz to be a rare and valuable national treasure.”

"From my point of view," says Yeager, "I have to support it. Jazz is part of our American heritage. The rest of the world looks at the U.S. and sees jazz as our most important cultural contribution. It's important to keep that alive.

"When you expose people to good jazz," he says, "they like it." 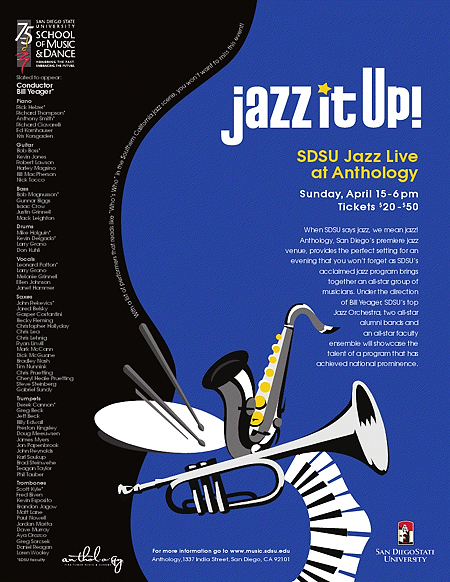