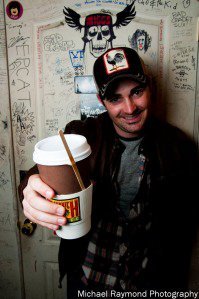 Singer/songwriter Josh Damigo's show tonight at Lestat’s Coffeehouse is actually the opening date of a southwest tour running through most of July.

While Damigo has toured the Southwest in the past, this tour has a special importance to him, as he will have the ability to visit his brother, Cpl. Nathan Damigo, who is currently incarcerated in Sayre, Oklahoma at North Fork Correctional Facility. Nathan’s story was recently featured in the HBO documentary, Wartorn: 1861-2010, that follows the stories of veterans of war suffering from Post Traumatic Stress Disorder (PTSD).

“I figured if I was going to drive that far to visit my brother, I might as well make it a journey. It’s a tough situation, but our family is doing the best we can to turn my brother’s story into a rallying cry for our troops, and I think this is my way of turning a dark situation into a positive one.”

When Damigo’s brother, Nathan returned from his second tour of Iraq in 2007, he found himself involved in an incident that would change his life forever. In Wartorn, Nathan’s story is told, including his battle with Post Traumatic Stress Disorder and the emotional toll it took on Nathan’s family when Nathan was arrested for an armed robbery charge.

Josh and Nathan's mother, Charilyn Damigo, has been writing a blog to document Nathan’s story. Through his music, Josh has found a way to tell the story of his brother, and bring attention to the experience of our troops who suffer from PTSD.

“Lestat’s is my favorite spot to hang out and perform,” says Damigo. “I’m pretty much there every night. I’m a huge fan of acoustic music, and the soundman Louie Brazier and I just sit back and talk about life and music and catch up on the latest celebrity gossip. I love ordering their Snickers latte, which has hazelnut, chocolate, and caramel.”

Damigo grew up in San Jose, where his musical career began when his mother signed him up for piano lessons at the age of 6. “I absolutely hated piano because my teacher kept giving me classical pieces,” Damigo says on his MySpace page. “I quit [piano] when I was in sixth grade…at 16 I taught myself to play guitar. Two weeks after that I had my first show. I was playing at churches. I was mostly singing [because] I was a much better singer than a guitar player.”

Damigo's push toward a full-time music career came after a celebrity endorsement - of sorts. “I played at Stateside in Santa Barbara, and an older man came up to me after the show and said, ‘Young man, don’t you ever stop playing, you’ve got something special,’ and he walked away. My friend came up to me and asked how I knew Kenny Loggins. I honestly couldn’t remember who Kenny was. When I got home, I freaked out when I realized he’s the guy who wrote and performed the music in Top Gun.”