CLAIREMONT MESA – For the third year in a row, all-star supremacy belongs to the North. A late rally pushed the North All-Stars past the South All-Stars 100-99 in the 2012 San Diego Senior All-Star Game on Friday night at Horizon.

“We just came in here wanting to have fun and get the win,” said La Costa Canyon forward Matt Shrigley. “It’s always nice at the end of the year to represent North County and end the season in style.”

In the first half, the North All-Stars erased an early deficit and used outside shooting to build 55-46 halftime lead. The North All-Stars opened up a 12-point lead early in the second half before the South All-Stars seized momentum by scoring 15 straight points to take a 76-73 lead.

The South All-Stars had an eight-point lead with five minutes left when the North All-Stars began a decisive comeback. With 1:15 remaining, El Camino guard Dayton Boddie made the go-ahead layup and the North All-Stars hung on for a one-point win after San Ysidro guard Javion Watson missed a three-pointer in the closing seconds.

“I was confident we were going to come back and pull it off,” Shrigley said.

Shrigley led all scorers with 19 points and was named Most Valuable Player of the North All-Stars team that featured seven Division I signees. The Section Player of the Year headed to San Diego State next season scored 15 points in the first half and was a defensive presence in the second half.

“Everyone has played each other once or twice, so it’s kind of like a little revenge from the last time we played each other,” Shrigley said. “There’s definitely some competitiveness there.”

“I just wanted to be aggressive and attack, and get the win for my team,” Jones said. “We should have got the ‘W’ – we’re kind of disappointed we didn’t pull it off.”

The North All-Stars have won three straight times and hold a 4-3 advantage in the series.

After creating a buzz at a nationally televised dunk contest during Final Four weekend, Francis Parker guard Dalante Dunklin lived up to the hype on Friday night in the slam dunk contest. The 6-foot Dunklin displayed an array of slams to take home the title.

“I knew a lot of people had probably seen it on TV and expected a lot from me, and coming in I just wanted to have fun with it,” Dunklin said. “I take pride in my jumping ability, and I’m really glad I got to win this.”

In the first round, Dunklin advanced by making all three of his dunks. Dunklin converted a two-handed reverse, pump-fake, and half-windmill dunk – all slams he knew he could make.

“The three dunks I pulled off, I can consistently do those,” Dunklin said. “I wanted to make sure I made all three of my attempts and got the crowd on my side, and luckily I was able to do that.”

In the finals. Monte Vista guard Rueben Nwando went first and made both of his dunks – including a slam over his mother on the second attempt. Dunklin took off inside the free throw line on his first attempt and captured the crown by leaping over a pair of kids from the crowd on his final attempt.

“One of the kids asked me earlier if he could get in the dunk with me. It was for fun and I wanted the kids to have fun, so I pulled him out for it,” Dunklin said. “The crowd wanted to have fun and see a show, so I put one on for them.”

Dunklin provided a nice encore to his appearance in the American Family Insurance Slam Dunk Contest on March 30 in New Orleans. In that competition the UC Santa Barbara signee dunked over his mother while donning a Flint Tropics throwback uniform, but was eliminated in the first round.

“I had a lot of dunks that I didn’t do (in New Orleans) because I was trying to hold them for later on,” Dunklin said. “In this contest, you either put it all out or you’re done – I figured I would just pull my dunks out in the beginning and hope that I could sustain myself.”

In the three-point shooting contest, El Capitan guard Tyson Kygar made sure the South All-Stars didn’t go home empty-handed. The 5-foot-10 sharpshooter made 22 three-pointers in the final round to claim the trophy.

“It feels good and shows that hard work pays off,” Kygar said. “I came in here and did what I like to do.”

Kygar defeated Mission Bay guard Jerald Albritton and Westview forward Sam Okhotin in the finals after all three players made 16 three-pointers in the opening round. The Vaqueros’ star that averaged 22.5 points per game during the season enlisted the help of his teammates in the contest.

“My teammates rebounded for me,” Kygar said. “I had to bring them out from home to help represent – they helped me win.” 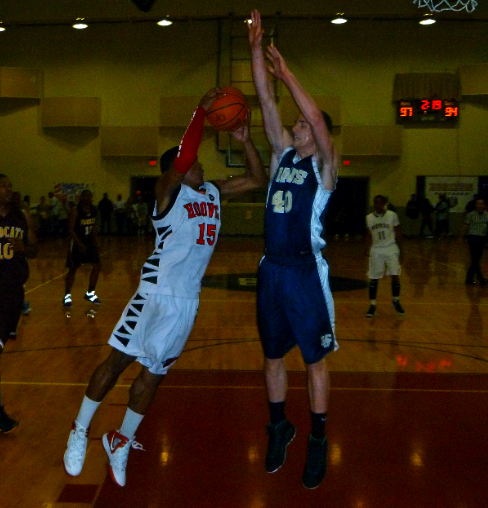