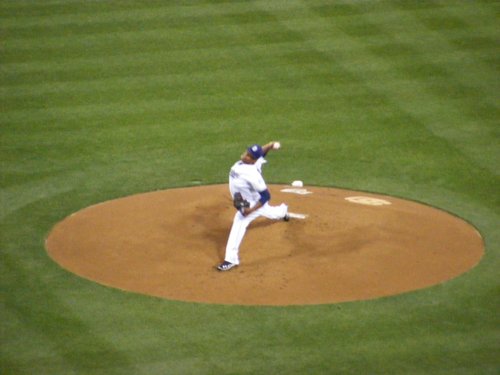 On Sunday, Chase Headley got his first hit of the season, a grand slam. You wonder how much that relieves the pressure, and with Headley's double down the line on Tuesday against the Arizona Diamondbacks after an off-day on Monday, apparently Chase is going to be okay. It wasn't enough to derail the Diamondbacks, however, who have yet to lose a game this season. Arizona beat the Padres in eleven innings Tuesday evening, 4-2.

"Awesome," Headley said when asked about the slam. "To have it happen the way it did with the circumstances the way they were, it was exciting."

When asked if the pressure was now off, Chase said, "I think it let's you breathe. Now you can settle in a little bit, relax. By no means does that mean we're sitting back proud of how we play, but I think anytime it lets you play a little bit more relaxed, in general you're going to play better than when you're pressing."

"Every series is important when you're playing a division rival," Headley said when asked of the Diamondbacks series. We have a bunch of division games early, so it's important enough for us to play well early so you don't put yourself in a hole so early in April. We need to keep ourselves right there."

Tuesday was the first game of the three game series against the Diamondbacks, and while Edinson Volquez looked good going seven innings and giving up only two runs on five hits while striking out eight, Diamondback's pitcher Trevor Cahill was a little bit better giving up only a run on two hits, although he did walk six Padres.

The Diamondbacks scored first in the top of the first inning. After a single by Diamondback's Willie Bloomquist, he moved to second on a ground out. After a pop out, Diamondback's catcher Miguel Montero had an infield single when he shattered his bat on a ground ball to first base and pitcher Volquez couldn't get over to cover first base because the pieces of bat coming toward him on the field caused him to hesitate. Bloomquist took third.

Then Paul Goldschmidt doubled home Bloomquist and Montero and the Diamondbacks led 2-0.

After squandering chances in the bottom of the first and second innings, the Padres finally got on the board in the third inning. Chase Headley doubled with one out and then Headley took third on a wild pitch. Jesus Guzman then grounded out to third and Headley scored.

The Padres got even in the seventh inning when Orlando Hudson opened the inning with a triple and then Jason Bartlett singled to left field scoring Hudson. The game remained tied at two until the top of the eleventh inning, when the Diamondback's Gerardo Parra was hit by a pitch and then Chris Young homered to left field to make the score 4-2. The Padres couldn't mount an attack in the bottom of the inning.

When asked about the outing by Edinson Volquez, Black said, "He just had that one bad inning and after that he was pretty solid. I thought his stuff was great. A good fastball, a good curve ball, the curve cam in to play more than his last start. A solid three pitch mix, threw the ball very well, 7 innings, two runs. If he does that, he's going to win a lot of games."

Starting pitcher Dustin Moseley has gone on the disabled list, and according to Black it's a more serious issue that a normal 15-day stint will cure. There is severe damage according to an MRI that was taken and Black expects that Moseley will be on the DL indefinitely. Moseley and team doctors are trying to figure out what the next course of action will be. Meanwhile, with Tim Stauffer also on the DL, Anthony Bass will get the start tomorrow, and Joe Wieland is likely to be called up from AAA and join the club on Friday, where his is likely to get the start at the Dodgers on Saturday.

Cory Leubke will take the hill on Wednesday against Joe Saunders in the second game of three against the Diamondbacks. First pitch is at 3:35. The game is televised, and can also be heard on XX 1090 AM.