But don't rush out to stand in line for one.

Ramen burgers are taking the world by storm!

At least, that’s what the bloggers and foodie pundits--who thrive on buzzworthy stories about food crazes and celebrity chefs--would have you think. To hear them tell it, the ramen burger will bump the cronut from its pedestal and irrevocably change the way we think about noodles.

For better or worse, people are lining up for the burgers, iterations of which can only agree that the bun be made of compressed ramen noodles. The patties and toppings, on the other hand, differ depending on who’s cooking. Here in San Diego, Rakiraki (4646 Convoy Street #102-A, 858-573-2400) is the spot for ramen burgers. “That place with the chicken stock ramen” leapt at the opportunity to capitalize on the ramen burger craze, creating a “signature” patty that incorporates, you guessed it, chicken!

Trapped between two ramen “buns” and a wrapping of lettuce, Rakiraki’s take on the ramen burger uses all kinds of chicken parts, a handful of mushrooms, and some secret herbs and spices compressed into a beige patty. It starts at $8.75 and comes with sweet potato fries.

Here’s the big problem, right out front. The thing disintegrates after the first bite. That’s not unique to Rakiraki, either, at least not according to what the internet has to say. The thought of standing on a sidewalk and trying to eat a ramen burger while significantly buzzed (which is a popular “origin” story for how the damn thing came about in the first place) is a total turn off. It goes beyond messy, passes through frustrating, and ends up in Bill Murray meme territory. 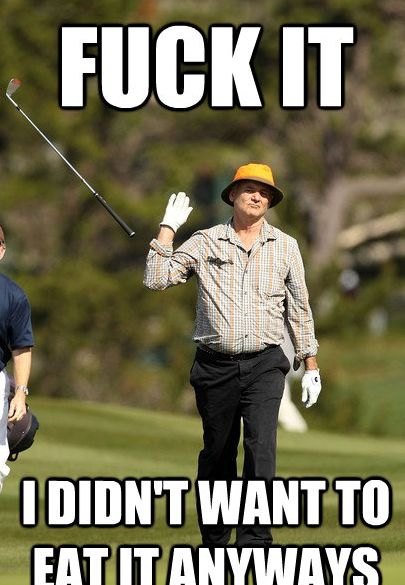 As far as the actual flavor is concerned, it needed salt. Also, a lot of people aren’t going to like the little chunks of chewy chicken cartilage that lurk within the patty, waiting to surprise you with a balut-like crunch of semi-ossified bone. Rakiraki’s Sriracha spicy mayo, on the other hand, is flawless on top of a sweet potato fry.

Sometimes, when chefs get drunk together--or more likely by themselves--they do...things...in the kitchen that shouldn’t be repeated. That has to be how the ramen burger came about. Vice’s “Munchies” episode sure supports the idea. Turning ramen noodles into a burger bun sounds so smart to the inebriated mind, but it should be more like sitting next to a beautiful girl on the plane: you get to enjoy in passing, but that “good-bye” is final, and you don’t have a future together. Letting go of elaborate fantasies, like marrying the beautiful girl on the plane and living happily ever after, or showing the world the “glory” of ramen noodle burger buns, is an important skill to cultivate. Faulkner advised writers to “kill your darlings.” Somebody should drop a similar nugget of wisdom on self-indulgent chefs.

I beg to differ. I recently was fortunate enough to have the authentic Ramen Burger in Pasadena. This was a weekend thing by Chef Keizo Shimamoto. It was a delicious sirloin burger, arugula, onions and a special sauce (that made it) between two fried Ramen buns. It was to say the least fantastic. It was juicy, yes I advise eating it over a plate or at least half a dozen napkins. My 10 year old very picky eater loved it as well and we both wanted more. I guess there are two versions or more going around. I had the best and I only wish the chef would open up a business here in So Cal. it would be epic to say the least. Please when writing about Ramen Burgers, don't include the "chicken" or "chicken parts" version and call it a Ramen Burger. It is not!

I think the only constant is that it has to have ramen noodles instead of a bun, as far as I can tell.

Ian, I tried it too -- both the plain beef version and the one with pork belly. Oddly enough, the burger's "bun" stayed intact with a beef patty, but not with the chewy pork -- that was hard to eat.

It's nice to say that I tried it for the sake of novelty, but it's not something that I ever see myself craving -- and when I want to eat something, I just HAVE to have it. I refused to wait for a table for two hours to eat at Roscoe's -- does their fried chicken really warrant that long of a wait? -- so I definitely wouldn't wait in line for four hours for the original Ramen Burger. I want to go back to Rakiraki to try their straight-up ramen, instead (the menu looked good!)

Yeah, I want to try teh regular ramen sometime too. They have this whole chicken broth thing going on that piques my curiosity.

As far as Roscoe's goes...you gotta go off hours and not in Hollywood, as far as I can tell. Pretty much worth it if you don't have to wait. It's Roscoe's, after all.