First thing to do here is look at the front door. 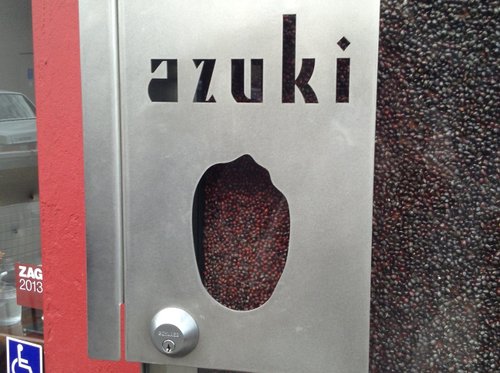 Look close. It is a pane of glass squishing a solid wall of reddish beans. Azuki beans. Most people rush in without even noticing. I only see them because there are so many customers crowding in to happy hour that I had a moment to look at it up close.

To be brutally honest, I had never heard of azuki beans. But Misaki the server... 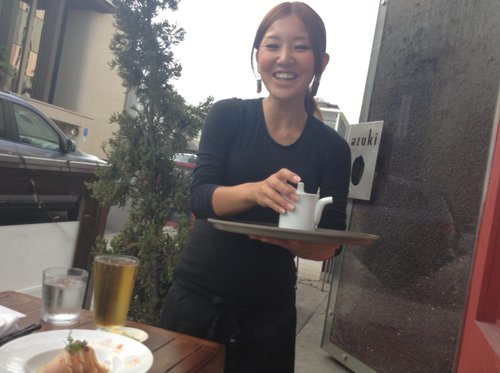 ...who finds me at a front patio table, says they're popular beans in Japan, mostly for making desserts. Their red color is auspicious and they're considered good luck to have at weddings, birthdays, anniversaries.

I spotted Azuki from the #3 bus, hauling up Fifth Avenue around six in the evening. Right across from the Salvation Army's divisional headquarters, is this little brick-red cottage with a small planky patio and just a couple of tables on the street.

Last time I entered this li'l ol' cottage was when it was a Polish place, but that has to be more than four years ago, because Misaki says that's how long Azuki has been going.

So I get inside and start looking for a spot at the long sushi counter that runs down the right side of this main room. Problem: it's almost full, and the free seats are reserved. Five sushi chefs are working full bore. 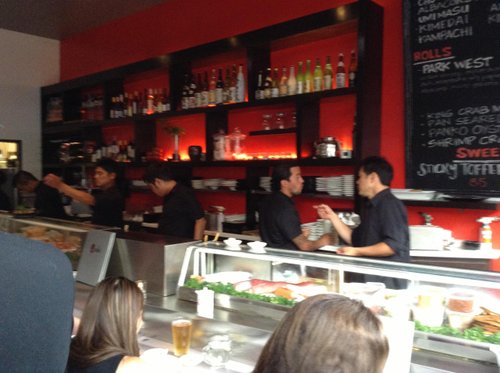 So where to sit? There's a room out back, empty, but as soon as I get there, I see why. It's hotter than Hades back there. No A/C. Luckily I find a spot in the patio on Fifth.

Happy hour, the thing that got me heading here in the first place (sandwich board on the street says they have it 5:00 to 6:30 Monday to Saturday) doesn't have a huge selection. And honestly four of the five dishes didn't really turn me on. They have garlic edamame ($3), shishito (bonito flakes with soy sauce, $3), seaweed salad ($4), and root vegetable fries ($5).

But the fifth looks interesting for this country boy: spicy albacore tataki ($6). Happen to know "tataki" means seared. So we're talking slices of raw tuna with its outside lightly seared. They have a pint of draft Sapporo going for $3 too. Deal. Although just after I order it, I see the hot sake going for $5.

Dang. But turns out, no biggy. Misaki brings a little jug of soy, and the green wasabi and ginger plate. But she says I shouldn't need it. "The albacore slices have a spicy ponzu and jalapeño sauce. It should be enough." 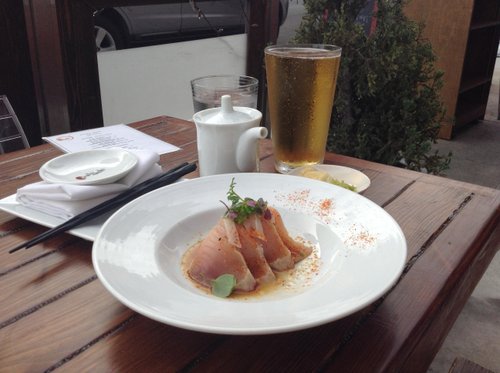 The other nice touch? Shiso. Tiny little mint-tasting green and purple leaves on top of the tuna. Like, micro-veggies. 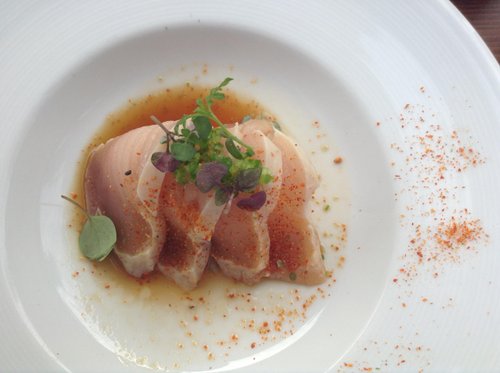 Bottom line: it's tender fresh, tasty. And with the beer, a good snack for nine bucks all in. And no, you don't need the soy.

The one thing I'd like to try now is a dessert made from some of those beans squished in the front door.

Yup. Azuki is definitely one of the best places between going nuts (Ota, Tadokoro) and budget sushi wackness (da Deli, natch). It's right in the middle, nice enough to merit dropping some cash, but not open-your-wallet wild sushi extravagance.