At the new dessert bar in North Park, the pastry cooks are doing some smart things with sweets.

Where once stood Caffe Carpe Diem (an ill-fated coffee shop that closed several outlets across town at once), now we have Swoon Dessert Bar (3139 University Avenue, 619-528-0875). The space has been extensively, maybe expensively, remodelled and it looks great. Spacious and minimalist, the wide-open interior looks out through huge bay windows on the eastern end of the North Park scene. It’s open late, until 11 every night save Monday, so it’s in a position to delight a lot of people.

The simple concept calls for plated desserts, coffee, and tea service. There are a few savory options, though even those are presented like dessert; a salmon eclair or pastrami and cheese gougeres. The desserts reign supreme, however, and there’s a marvelous level of talent on display, all of which is available for $7-$8. 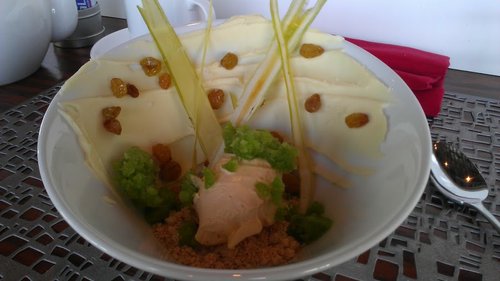 That kind of thing is hard to pull off, but they did it to perfection. The texture of the ganache and ice cream was beautiful and the potent raisins underscored everything with a boozy kick. The service was confusing at first, with the ganache smeared at the outside of the bowl and studded with the raisins, but the intelligence behind the portioning assured that there was enough of each element to form a complete, peanut-buttery, celery-infused bite.

I was simply stunned.

And that’s not to mention the selection of Chinese pu-erh and oolong teas, which only improve with second and third steepings, and the specialty coffees from all the local roasting titans (Bird Rock, C&T Collective, etc.).

Swoon is not absolutely perfect. The complimentary French macaroons served alongside my tea didn’t achieve the melt-in-the-mouth texture that makes these simple cookies famous. The bar doesn’t have a proper website yet, which seems preposterous in light of the six-month building process. And I can’t get 100% behind the name. It makes me think of Victorian ladies and sets the bar impossibly high. I may have nearly wept with delight, but I was still far from fainting.

At this point, I’m quibbling and I realize it. Let me just say that Swoon is brilliant.