This is me admitting to being wrong about a restaurant based solely on not wanting to believe the hype. I stand corrected.

Sometimes, I like to think that I know better than everybody else. Sometimes, I do. Sometimes, as with the OB Noodle House (2218 Cable Street, 619-450-6868), I’m wrong. Everybody--from yelping idiots to Reader critics to my vegan ex-girlfriend who shopped at the co-op down the street--loves the place. I figured it was nothing but hype, passing off clever smugness in place of good cooking. There's plenty of that going around in town already.

Really, what it all boiled down to was this: why would I go to OB for sterilized Vietnamese when City Heights is closer and filled with sneaky little pho shops?

That’s valid, but I just got it wrong. The Noodle House is good. Pretty damn good indeed. You hear that, everybody? You were right. Popular opinion wins this round.

I was in OB already, so it didn’t hurt to suck up my reservations and put the restaurant’s soup to the acid test. I still think the place looks like garbage, but the crowd was a lot more friendly than I’d expected and the classic rock soundtrack was rad, albeit prohibitively loud for conversation.

The Noodle House has a huge beer and sake list, but I have to give it up to one thing only, and that thing is chamoy flavored sake. $10 got me a pitcher of salty/sweet beverage that went perfect with a bowl of pho. Makes sense, when you think about the salty lemonade drinks at pho shops.

And how was that pho? Like I said, it was pretty damn good. Not the most subtle broth I’ve ever had (I was looking for anise and clove flavors in the broth and not quite finding them where I wanted to), but the saltiness and beefiness were absolutely spot on. And the noodles were perfect. I ate the entire thing, every drop, and I’ll happily say that it could hold its own anywhere. Not to mention that it was only like six bucks! 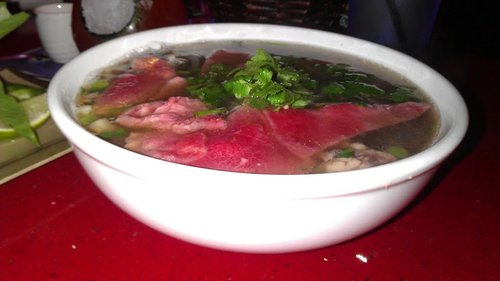 I won’t go so far as to say it was “the best,” but I can admit that I was wrong and I’m reminded, once again, that keeping an open mind is always a good thing.