After working 90 hours a week for four years, Mark Pelliccia feels like he has nothing to show for it. After years of toil at 25Forty Bistro and Bakehouse, he claims he was close to clearing the restaurant’s debts and operating a profitable business. And that’s despite the notoriously poor location, removed from the bustle of Old Town proper and bereft of parking. But a quarrel with his silent partner in the business--who Pelliccia claims had been absent from operations since 2010--resulted in the restaurant’s unexpected closing. The first-time restaurateur is understandably furious over the whole affair.

25Forty was a good restaurant and a strong part of any “Old Town doesn’t totally suck” argument. Seeing the doors shuttered puts a damper on optimistic attitudes about the restaurant industry. If a good spot can’t make it, where’s the hope for anyone trying to give it a go as a restaurateur? 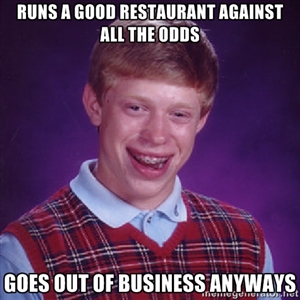 But Pelliccia is undeterred. Though he feels like he received a metaphorical “kick in the crotch,” from just about everyone, he realizes that business is business. The restaurant industry isn’t an easy game to be in, and Pelliccia learned much about entrepreneurship during his time in the office and kitchen at 25Forty.

Without the money to fight a protracted court battle, Pelliccia is more or less out of options in terms of 25Forty. For now, he’s eking out a living baking pastries for the (awesome) Roast Coach and doing a little catering. Once he gets his feet back under him, he wants to start a new place, circumventing all the problems of 25Forty right from the giddy-up. Those of us who liked 25Forty wish him luck. We would love that the news were better, that Pelliccia were closing his restaurant to open something new with a better locale, but the sobering facts of this difficult industry won't be denied.

This is really too bad. He gave such value for money, and interesting good food. And such style. I really hope somebody finds him a spot, quick.

I would imagine Mark will end up wearing the big hat at a kitchen somewhere else in town for a while (I'll keep tabs on that), but I think he will end up starting a new restau in the vein of 25Forty...but with more parking!