Restaurant at the Balboa Park Golf Course is a total hidden gem with a killer view and cheap eats.

Golfers know that the municipal golf course in Balboa Park is excellent. As city courses go, it’s one of the better ones.

Hipsters know that Tobey’s 19th Hole Cafe, located by the pro shop at 2600 Golf Course Drive, is one of the raddest spots in town to soak up some sun, drink cheap mimosas, and breakfast above the 1st tee box and 18th green--on which hole a certain food writer recently missed the easiest birdie putt he’ll ever see.... 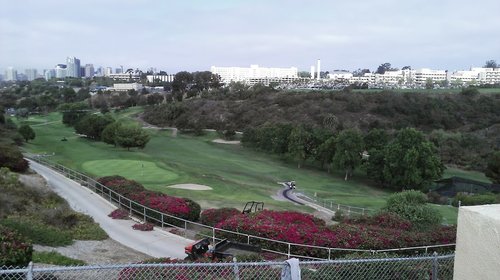 But seriously! There’s no beating the south and southwestern exposure on Tobey’s patio, which has to be one of the finest open secrets around, at least in terms of breakfast hideaways.

In so many ways, it’s a ridiculous place. A cadre of sassy, middle-aged ladies man the tables with a kind of irreverent savoir faire that’s unlike anywhere else. The cafe seriously has a non-functional website...in 2013...and the official TwitFace presence hasn’t seen any action since the place opened in ‘34.

Yet it works. And marvelously.

Tobey’s does lunch, too. But go there for breakfast. As the late-morning sun breaks over the patio and the early bird golfers make their way across the back nine, there’s no denying that Tobey’s is one of the coolest weird hangouts around. Playing golf, or even hitting a few range balls, isn’t required before a trip to Tobey’s, but it doesn’t hurt to build a breakfast yearning with a bucket of wild banana balls and duck hooks beforehand. Remember: you don’t have to yell ‘fore’ at the range.