It's the first thing you notice when you get your check.

But what does it mean?

Paul Dobson, the bullfighter and downtown restaurant pioneer (he still has Dobson's at 956 Broadway Circle), opened it in 1984.

It really does have an old world Spanish feel (not that I’ve been to Spain) with its black and yellow and woody color scheme. 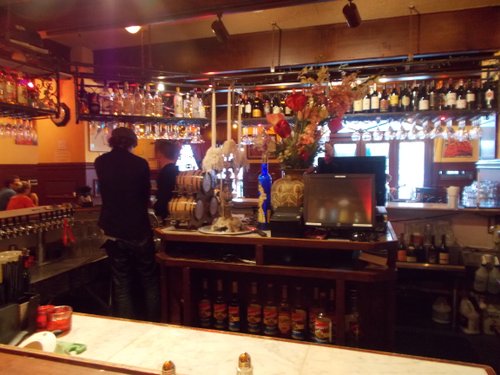 First kinda eye-opener is that this “tortilla Española” is a sunset tapa dish. Guess I'm more used to the idea of eggs at desayuno. But given as how it's probably nice and salty, I think I might jes' take to it as a tapa. 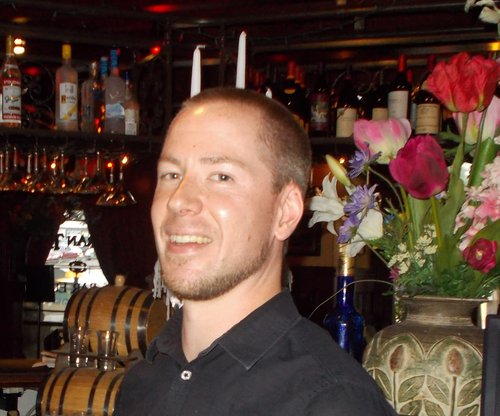 ...is getting me a (also happy hour) beer from the wild shores of Nova Scotia, and I need a munchies to go with it.

The beer’s an Alexander Keith India Pale Ale. Never heard of it before. Three bucks.

I’m sitting at the bar (you need to, if you want happy hour prices) next to this clump of gals. Glenda, Wendy, Genail, Pamela, and their lone male buddy, Todd. 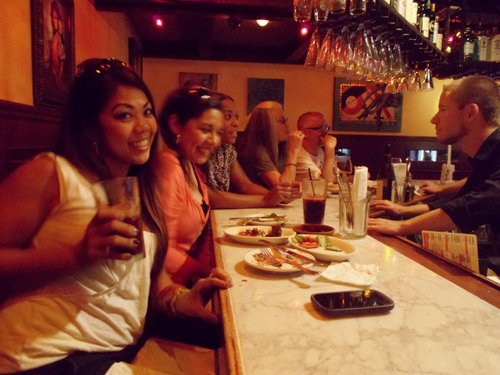 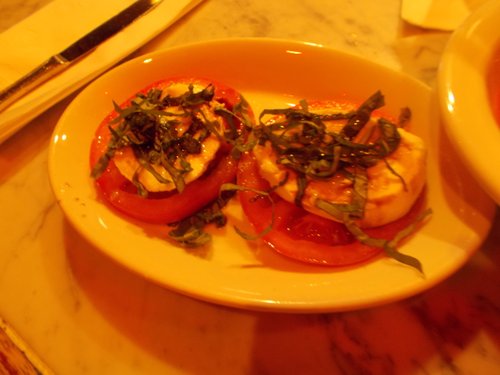 Me, it’s the tortilla. They say it’s the single most popular tapa in Spain. That it’s been the poor man’s belly filler for centuries. It’s basically a thick omelet of eggs and spuds cooked in olive oil.

Mine comes with two wedges of omelet and a little mess of red peppers and onions in the middle. 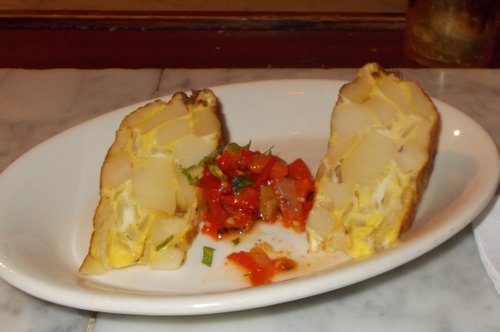 It’s good and filling. I mean, no taste zingers in it to send you pirouetting to the ceiling and back, but solid country food.

The beer, too, good solid beer. 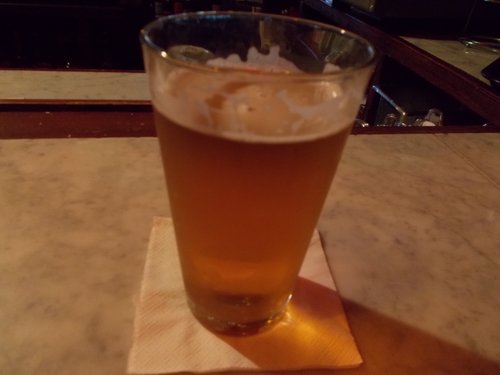 When you’ve been spoiled, you get picky.

But now I'm hearing how Alexander Keith could be the oldest brewery on the North American continent that has never closed its doors (thanks to it being in Canada, which never got whacked by Prohibition). Alexander Keith, turns out, was a Scot who survived the stormy seas to Nova Scotia and started his brewery there way back in 1820. Wow. Still going.

Except, uh, now it’s owned by Anheuser-Busch InBev. So that dents the image of Wild Canadian Beer for Trappers. And maybe explains the mild taste.

But who’s quibbling? The company’s good. This horseshoe bar practically guarantees that. And now we’ve got a live guitarista making you feel the suffering of the gypsies who created the flamenco music he's playing. Edward Fishwick. 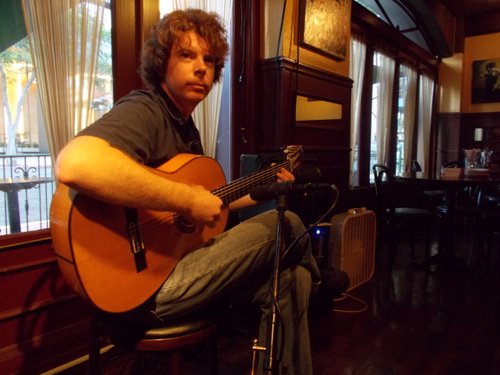 He actually went to Spain and learned in the countryside in places where you sit in a circle and pass the guitar from hand to hand, and you’d better have a song ready to go.

And it better not be Kumbaya.

Man. Food, wine (okay beer, but the HH wines are $4 a glass), and free transportation to Andalusia.

But the check also says “Expect excellent service! Please let us know immediately (or by email) if this was not the case. Manager will credit your check or issue a gift certificate.”

Can’t say fairer than that.

I wonder how long they have been doing the mandatory service charge there? I remember people getting all up in arms about that happening at the Linkery. There were angry letters and editorials, even threats to sue! It would be amusing if La Gran Tapa had been doing it the whole time and nobody was throwing fits. Probably because they don't make a big deal out of it like the way it was at the Linkery for a while.