Like many families, we have a number of restaurants that fall into the “old favorites” category. These are restaurants that we’ve been going to for many years. Garcia’s falls into this group. Despite the fact that we no longer live down the street from them, they still occasionally come around in the “we have a hankering for…” rotation.

Over the years our “usual” selections have changed. Mark used to get the chicken burrito, which is so big; it must have had three chickens’ worth of meat in it! After many years, he branched out and now orders a combo plate called “Chewy” ($11.95) with a smaller chicken burrito, a beef taco, rice, and beans (whole, refried, or black). Our daughter has graduated from the ubiquitous quesadilla to taquitos ($4.95), which at least includes guacamole, lettuce, and tomatoes (for those of us who count how many servings of vegetables our kids are getting each day). 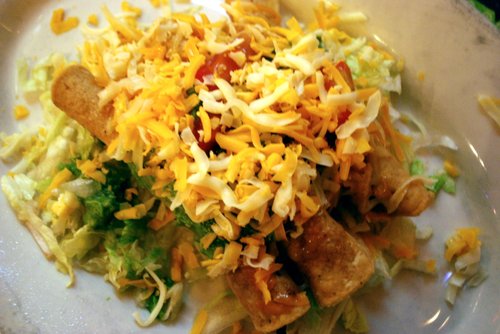 I ordered my new favorite, Verduras a la Parrilla ($13.95). A vegetarian fajitas plate, it’s described as having a “Blend of broccoli, sliced zucchini, carrots, bell pepper, mushrooms, onions & tomatoes”. This is probably the third or fourth time that I’ve ordered it over the past two years. The first couple of times, it called attention to itself with a noticeable sizzle as the server brought it to the table. The cast iron plate nestled in a wooden trivet displayed seasoned vegetables with just enough charring to make my mouth water. The vegetables are served with tortillas, corn or flour, beans, rice, and guacamole. Interestingly enough, I have yet to order this dish and get any broccoli. And sadly, the past couple of times that I’ve ordered it; there was no sizzle and no flecks of char. It was still tasty, but not quite as satisfying. 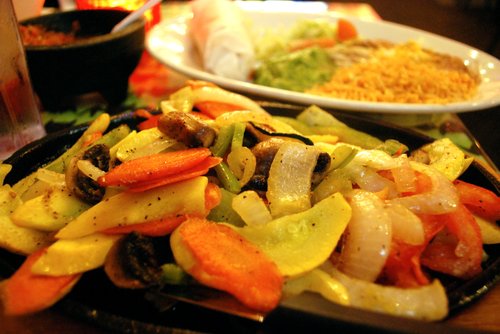 The long history of the Garcia family is available on their website and we’re clearly not the only family who are regulars as evidenced by the opening of the twice as large Encinitas Garcia’s in 2009. The homemade chips and salsa in the colorful, family-oriented setting and classic Mexican fare are sure to create new regulars at both locations, while our family continues our patronage at the original.