You meet the nicest people at beer festivals.

Acknowledgement to those who read that statement and, recalling bumping into some belligerent, drunken, alcohol-blunted Neanderthal, doubt the validity of that statement: yes, this, too, is a prominent suds fete scenario. That said, if you're selective about the events you attend—those that are about appreciation of special beers, versus the availability of many beers—I guarantee, you’ll decrease your probability of colliding with alcoholics while simultaneously increasing the chances of making the acquaintance of reflective craft beer enthusiasts in very good spirits. 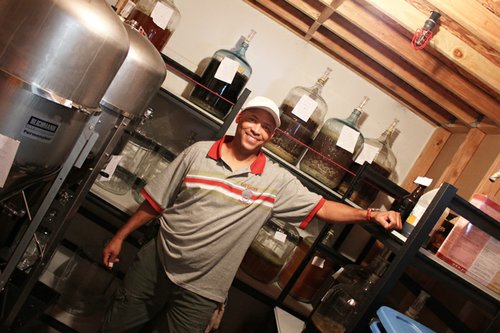 That’s what happened at Oakquinox last year at Stone Brewing World Bistro & Gardens, when I met Marcus Cole, a man I’ve since enjoyed referring to as “Kat Daddy.” Many know Marcus by that nickname, especially since he started using it as the moniker for his business, Kat Daddy Brewery (14300 Elsworth Street, Suite 106). A nano-brewery producing a variety of beers that leans heavily toward the darker end of the spectrum, Kat Daddy is based in a business park close to Moreno Valley’s March Air Reserve Base.

It’s an apt location for a brewer who developed his love of beer as a member of the US Air Force tationed at Ramstein Air Force Base in Germany. When he arrived, he was taken on a tour of the area that concluded with the downing of a humongous stein of hefeweizen from a local cafe. Since then, he’s loved beer and, thanks to a lieutenant colonel who commanded a homebrew system when not in uniform, Cole developed an affinity for the craft of beer as well. 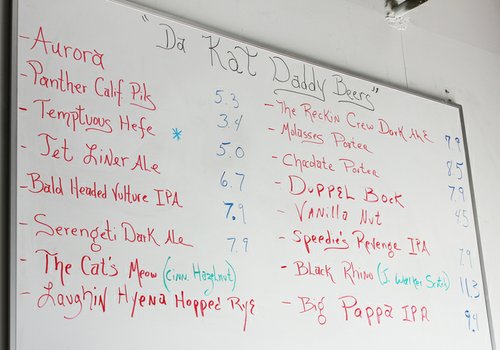 That amour pours forth at his tasting room. Cole’s exuberance is infectious. An animated, talkative guy with passion and positivity to spare, his smile and welcoming demeanor serve as an X-factor adding appeal to his humble space. It’s no wonder he’s cultivated such a strong following in his area, particularly among airmen who appreciate both he and his beers. Patronage has been such that he will soon take over the suite next-door, doubling his available space. 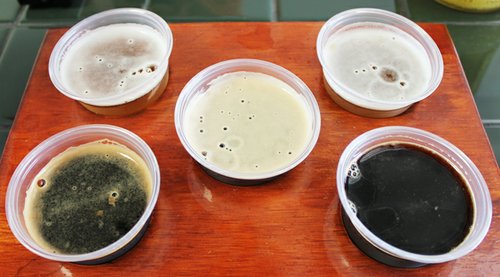 A flight of five tasters including (at bottom, from left-to-right) Molasses Porter, Reckin' Crew dark ale, and Black Rhino.

Before opening, Cole interned for a year-and-a-half in the brewhouse at PH Woods Restaurant & Brewery. That Moreno Valley brewpub has since closed, but their practices live on through Kat Daddy and its beers. Among those are an award-winning Molasses Porter, a dark ale called Reckin’ Crew, and Black Rhino, a stout given extra richness via Johnny Walker red-soaked oak chips. When asked why he makes so many darker beers, Cole says it’s because they are both what he enjoys most and what he’s best at making. 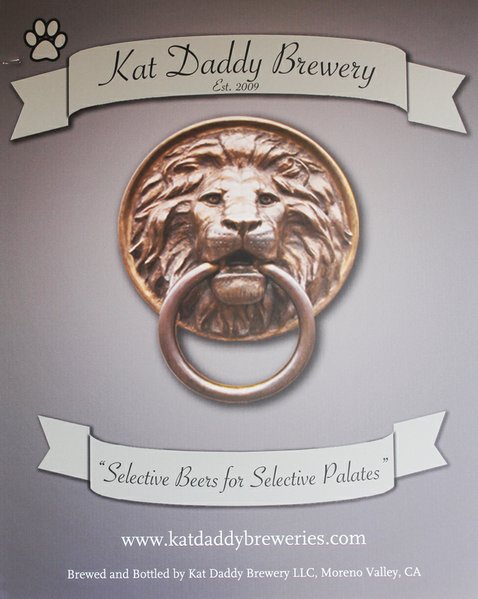 Before deciding on his current location, Cole weighed a number of options. Because Moreno Valley had no breweries like his within its limits prior to Kat Daddy, the process for opening was very difficult. It required a great deal of trailblazing spirit, patience, and tenacity, but in the end, he decided to build his brewery exactly where he wanted to versus taking the easy road and being just another brewery in the City of Riverside limits. So far, that decision has worked out quite well for him.