The first time I walked into the tasting room at Mira Mesa/Miramar nether regional Rough Draft Brewing Company was in mid-February. At that time, it was completely empty and non-operational; merely a meeting space for owner Jeff Silver and I to discuss his soon-to-debut venture. There was an echo to the spacious, brewery-adjacent place as we talked about the line of homebrewing recipes he was looking to take to the next level. 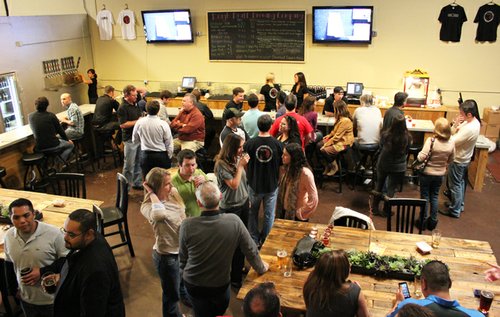 So, you can imagine the shock and awe that washed over me when I walked in to find the place mobbed last Friday. From the couch and loveseat-equipped lounge area to the banquet style wooden tables (constructed by Silver’s wife) and the lengthy concrete bar, not a spot was free. With amenities like that, who wouldn’t want to clock off and get their TGIF on here?

Still, this place has only been open two weeks! All I could say was, high-ho Silver, clearly you’re on to something. Like a number of new brewery owners that includes Societe Brewing Co., Rip Current Brewing Company, and Latitude 33 Brewing Company, Silver realizes a comfy, inviting space is almost as important to a facility’s success as the beer being poured at it. 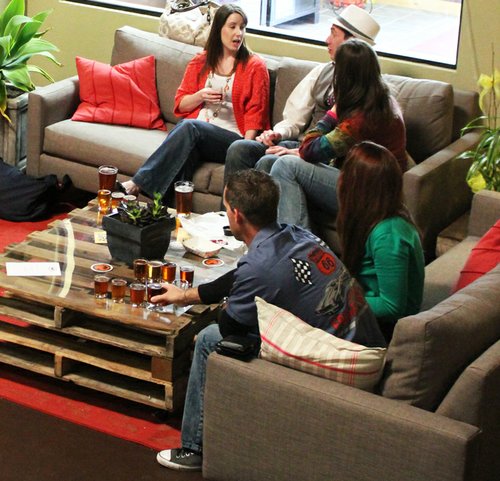 On the suds front, Rough Draft had five beers on the board that night. The first, their Belgian Blonde, was light and refreshing, if not a bit thin. That minor shortcoming was forgivable given the girth of the other four brews. An amber ale was on the thick side, with an abundance of malt that failed to get balanced out despite a clear abundance of hops. Upping the hop dosage and adjusting the recipe to make the beer an imperial red ale like Lightning Amber Ale or Stone Arrogant Bastard Ale might be the way to go with this.

What’s that you say? Yo, Hernández, you may dabble in the art of homebrew, but who are you to tell this guy what to do with future iterations of his beer?

Relax, as the name of Silver’s brewery suggests, this is exactly what he wants you to do. The beers that are on right now are first-run rough drafts that he wants his patrons to weigh in on. The guy even has the guts to encourage Yelp reviews. Talk about a thick skin and a desire to do right by his clientele. 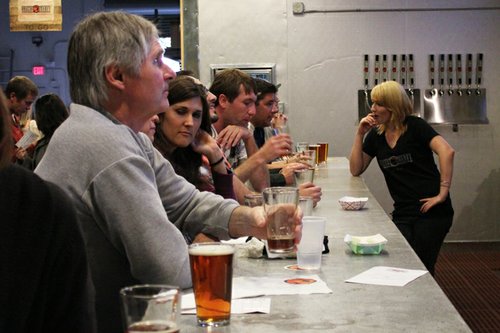 On the opposite end of the criticism spectrum, I’ll say that Silver’s best beers right now are his IPAs. They’re not perfect, but they are meatier than most, tasty and drinkable. They don’t’ burst with fruit on the palate, but deliver plenty of flavor. To me, balancing a beer is like adjusting a stereo. Malt is the bass, hops are the treble. West Coast IPAs tend to go Spinal Tap, turning the treble up to 11 to get an ultra-crisp, tropical fruit and pine-spiked end product, whereas old school British-style IPAs look to level things out with more of a five-five split. Rough Draft’s Eraser IPA and newly released Frontal Lebottleme IPA fall somewhere in-between, but closer to the across-the-pond version.

Based on Silver’s business model alone, this is a brewing company to watch. Rough Draft Brewing Company is located at 8830 Rehco Road.

I'm curious about how they are able to have tables, chairs, and couches. In almost every brewery I've been to in SD that isn't a restaurant (Ballast Point, Lightning, Port, etc) there are no chairs due to some arcane state laws. What makes this different?