How to Cook (and Eat) Balut

I got embroiled in a conversation the other day with a colleague of Vietnamese extraction named Lydia. For whatever reason, we ended up talking about weird things that get eaten and the dialogue eventually turned towards balut. She said that she'd come back to liking it, after having turned away from the dish as a teenager. "Balut" refers to a partially-formed duck embryo that's been boiled in the shell. In Southeast Asia it's a popular street food.

Now, I will try just about anything once. I'd heard tales of balut, but never had the chance to try it. I asked Lydia if she knew of a restaurant that sold the dish, but nothing sprang to mind and I thought that was the end of things. That was yesterday. Today, she walked up to me in the morning and said she had a surprise for me; and then she handed me half a dozen eggs, securely packaged in green cardboard.

They look like regular duck eggs. Innocent. Lydia said all I had to do was boil them, exactly like a hard-boiled egg, and eat it with a little salt and pepper. Well, a couple of hours later, I did just that. Ten minutes at boiling, a little cool water bath to prevent overcooking (which may or may not be a problem with this dish), and my first ever balut was ready to go.

I admit, I was a little spooked. And it only got worse when I cracked it open and the first of the "broth" ran out. I guess you're supposed to just make a little hole at the skinny end of the egg and then sip out the fluid that's inside. It tasted like a chicken consomme.

Peeling away the rest of the eggshell revealed the creepiest snack I've ever laid eyes on. There was still some yolk that hadn't been absorbed, as well as some egg white, but the entire thing was covered with veins and slime. Behind the yolk was the duck embryo. It didn't look like much, but there were crucial structures in place--wings and feet--that made it easy to recognize. I had second thoughts. 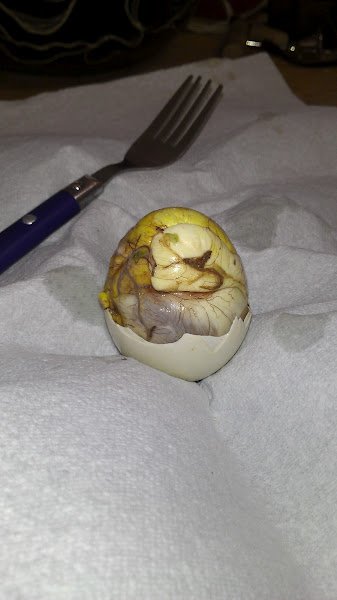 Of course, it was far too late to turn away. If there's any white left in the balut, it's all rubbery and inedible, so I peeled that off and picked at the yolk a little. That was hard and crumbly, maybe I had overcooked it some, but mostly tasted like egg yolk. No big deal. But, after that was gone, only the duck remained.

I paced around a little, but eventually sucked it up and tucked into the duck.

There are little bones that have a rubbery snap and some parts that look an awful lot like feathers. The internal organs are in place, more or less, and contain lots of rich, red tissue that's full of flavor.

Mostly, it tastes like duck! Really rich duck. Soft, rich duck. It's almost like a giant, duck flavored steamed clam. After the first bite, my reservations melted away.

I totally like it. Good thing I have five more.

If anyone feels inspired to try this at home, balut can be purchased at Vien Dong Supermarket, corner of University Avenue and 54th Street.

Nasty! Ewww! YOU ATE THAT? OMG!

I will try this with a Filipina friend of mine. There is no way I could do this without moral some support.