The folks at North Park’s URBN (3085 University Avenue) shot me a line when they started offering breakfast pizzas. I was instantly intrigued. I had recently experienced something similar—a pizza topped with bacon, tater tots, and fried eggs—at nearby University Avenue eatery, The Foundry. That protein-rich creation screamed AM but tasted PM, probably because the humble but tasty fried egg is becoming such an omnipresent topping. I’ve had more yolk-bathed pizzas and flatbreads this year than all of those preceding it combined.

With the exception of the fact they’re not available in the morning hours (you can get them at a discounted price of $10 from noon to 4 p.m., Tuesday through Sunday, or at full price after that), URBN’s new pizzas are 100% breakfast. Both varieties—the Pig n’ Egg, and Veggie n’ Egg—are white pies topped with scrambled eggs, mozzarella, and a layer of mashed potatoes. The Pig is available with chopped bacon or crumbled sausage (but if you ask, they’ll let you go Denny’s Grand Slam style and enjoy both), while the Veggie is topped with sliced tomatoes and julienned green bell peppers.

I ordered a small (a misleading term since the smalls serves two-to-three people) that was half meaty, half veg. I’ve always been a fan of thicker crusts and enjoy chew over crisp, so the New Haven-style, coal-fired ‘za at URBN has never been a fave of mine. It’s good and all—just not something I crave. That said, the thin, deeply charred crust this baking method produces is best for this type of pie as it mimics a thin, warm, slightly blackened flour tortilla in texture and taste. 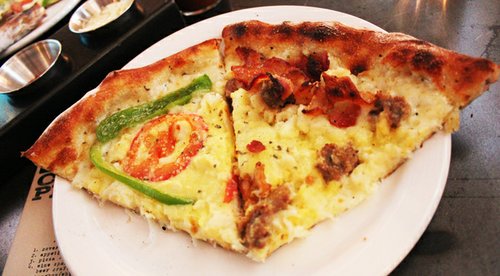 Even equipped with the perfect dough, the pizza fell a bit flat on its own. This was especially true for the vegetarian version. The high-water and low-flavor nature of the tomatoes and bell peppers detracted from the overall richness of the dish. Plus, the high ratio of potato to the rest of the ingredients was way off. But the Pig—that was a whole other story. The bacon and sausage brought some needed salt and made it taste more like my favorite breakfast option—a breakfast burrito.

The pizza warehouse felt even more like a taco shop when I sprinkled on some black pepper and dried oregano, and broke into the glass bottle of Tapatio hot sauce they serve on the side. A heat-seeker by nature, I believe just about anything can be made better with a few drops of spicy red on top. This dish drives that theory home big time.