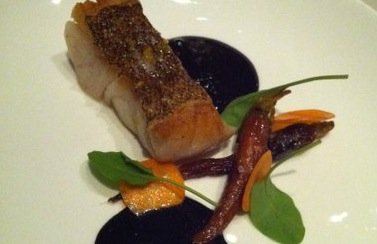 New Menus Leave Much to the Imagination

Five years ago, I was noticing that a lot of menus in food-forward cities were starting to read very differently from those in San Diego. While in S.D. a dish might be described as "oven-roasted, pancetta-wrapped quail with crimini-pinenut cous cous stuffing, truffled asparagus, and balsamic reduction," in NYC or L.A. it would be described as "quail, pancetta, asparagus, balsamic."

I wondered how folks could be expected to make a decision on what to order with only the base ingredients being called out, especially at a time when there were more culinary techniques being employed than at any other time in history.

This menu trend has reached San Diego. The first place I saw it in full force was the now-closed Red Velvet Wine Bar, where chef Luke Johnson emulated the ways of mentor Grant Achatz of ChiTown’s much-celebrated Alinea and NEXT. A slightly more-informative version of this style is in place at The Grand Del Mar’s Addison and a handful of other restaurants.

The most recent I came across is 1500 Ocean at the Hotel del Coronado. There you’ll see dishes such as "grouper, sea urchin, sorrel, carrot." The dish is actually a rectangular strip of nicely seared grouper with carrots served two ways — smoked and roasted — and a pitch-black sauce made from uni and several secret ingredients.

Even if you’re a New Yawker claiming cutting-edge culinary supremacy over the rest of the country, there’s only so much you can gather from four nouns on a page. No amount of culinary enlightenment will allow you to put forth more than a best guess as to what a dish will look like. It doesn’t work, and it doesn’t have a place in San Diego, where we’re still finding our way where cuisine is concerned.

Buying something without knowing all about it is ill-advised, and no matter how nice a waiter or waitress is, nobody enjoys having to play 20 questions when all the explaining should be on the menu. Tell me how my carrots are cooked (or if they’re cooked at all), and don’t let me pass up something as delicious as “ham hock, turnip, nasturtium, mustard” simply because it’s difficult to imagine. Just what you were picturing in your head with that group dish, right?

Lisa Sullivan Hamann: The more information on a menu, the better!