Chapter 4: The View From The Window Seat

Every old car that I have ever owned has needed work immediately.. I prepare for it now. My new 1950 Ford Custom Club Coupe was no different.

Into the shop it went, fresh brakes all around, carburetor rebuild and a fresh set shocks.

It actually ran really well on the trip down from Oakland, the big complaint was that when you would hit the brakes the car would dive left. Pretty common issue with drum brakes front and rear.

After getting the car back from Car Connection, it was much nicer to drive. I fixed the drivers seat (it had a hunk of wood jammed under the seat back to keep the driver from sitting in an extremely relaxed driving position) and gave it a very good cleaning.

The boys and I were having a great time with the car. Anytime I showed up to get them in my late model Toyota there were the sighs of disappointment (why can't we take the COOL car Dad??). This car was exactly what I hoped it would be - great times with my boys.

I had the Memorial Day Monday holiday off... no boys, no BBQs that I was going to - time to myself. A day with the 50...

I decided to drive up to Julian and then maybe head down the back of the mountain into the desert. I set off in the morning on my way out the 67, taking it real easy, there was no rush today. It was a perfect day, not too hot, but no chill in the air. I stopped in Ramona to get breakfast at the Kountry Kitchen. Surprisingly I did not opt for my usual huevos ranchero (at the KK there is a fat layer of carnitas on the huevos ranchero) instead I went light and has an eggwhite and veggie omelette. The girl sat me right in the front window - so I spent the time there with a mooneyed expression on my face, staring out at my Ford that I had been lucky enough to park right across the street. 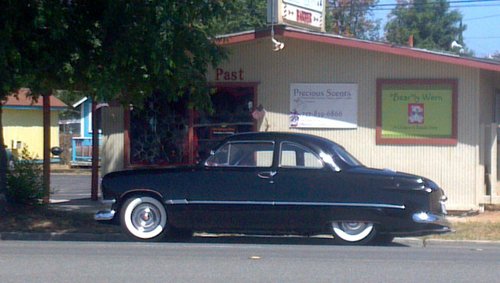 The '50 parked in Ramona

With an excellent meal under my belt, it was time to head east to Julian. I made a stop at the Inaja picnic grounds to walk off a little of the omelette and stare over the cliff.

9 more miles and I was in Julian - the place was slammed. There must have been over 100 motorcycles roaming and parking up and down the main drag. It was a kick to see the stares and waves from the bikers on the sidewalks. A quick (EXPENSIVE) gastank fill up and I decided that I'd head south instead of east into the desert. The flathead was really showing it's age on that climb to 5500 feet. I made a few stops on the way.. There is a spot on the S1 where there is a turnout. The view from there is straight east into the Anza Borrego desert. One of my favorite spots in all of San Diego County. 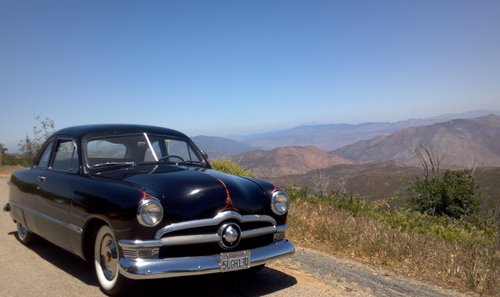 Looking east into the Anza Borrego Desert from the S1 in the Laguna Mountains.

The turnout is just a bit up the hill from a sign proclaiming that the elevation is 5,00 feet, so I figured that I was at 5,100 feet or so. A couple of guys in a Rav4 drove past, stopped in the middle of the road, turned around and pulled up next to me. This older guy jumped out and rushed up to me and the '50 to get a better look. I swear, the guy had all the mannerisms of Huell Howser. It was awesome, such a nice guy, he was so excited about the car. It was all "gosh and golly" for a while as he examined every inch, pointing out the striping, the interior, wanting to see the flathead. We talked for a while and then they took off. I really do love that part of having an old car. I brings out the best in people. I'm smiling right now as I relate the experience.

The road from here on out gets pretty windy... I did make a couple more stops. One stop was at a kind of tree cemetery. Standing in a meadow are all of these bleached out trees, some knocked over with very few branches. It's a solemn place - the only sounds were the wind and the occasional cry of a red-tailed hawk that was being harassed by some small birds. The only photos I grabbed were are on my SLR, so that will have to wait.

The drive back to town was much of the same, winding roads, perfect weather.

That night I was still on my own, so I decided to get dinner out. I drove down Adams to the Kensington Cafe and had an amazing flank steak with pureed cauliflower. Again, I was parked at a window seat, and my '50 was right out side. 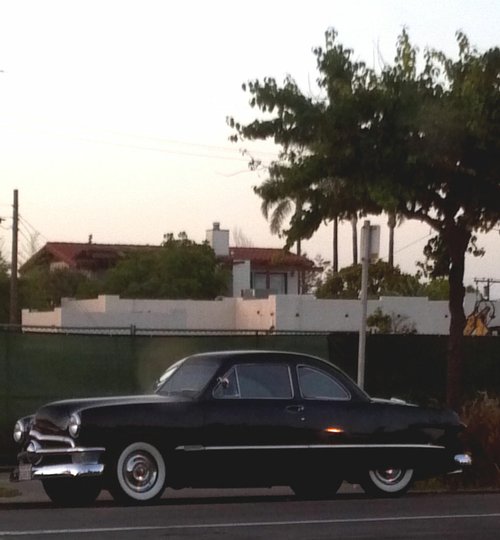 The '50, parked on Adams across from the Kensington Cafe.