Hey! Remember The Village People, the supergay supergroup who helped to introduce Middle America to the concept of homosexuality with chart-topping hits like YMCA, In the Navy, and Macho Man?

Randy Jones, the cowboy of the group and star of the colossal celluloid flop, Can't Stop the Music, plans to wed his partner of 30 years, Will Gregga, this week in New York.

According to the press release, gratefully reprinted by TMZ, the couples' union will be a three-day event!

September 12 -- The public proposal: Randy will pop the question in front of friends and family in Columbus Circle, followed by a celebratory dance to Andrea Bocelli's "Septiembre Amor."

September 13 -- The ceremony: Randy and Will will swap "I Dos" at City Hall in front of their mothers. After, they're headed to a trendy rooftop bar to party with special guest host Warrington Gillette -- who the couple credits as "Jason" from "Friday the 13th Part 2."

September 14 -- The post-wedding banquet: the couple will invite guests to "honor the Italian heritage of Will Grega" with a "true Italian banquet" at a restaurant in Little Italy. 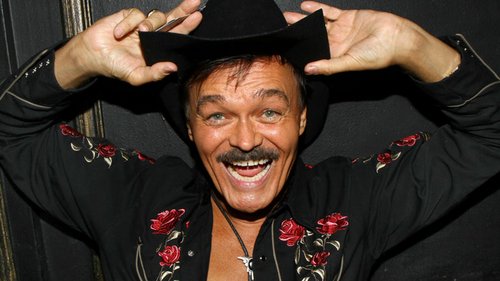 I scoured the net for a clip of the band's appearance on Bob Hope's All-Star Birthday Party (1979) and came up empty. Thankfully, a memory concerning Bob's solid allegiance to the band rattled inside my head.

These cats were the next big thing, you know, and Bob was eager to have TVP appear on one of his specials. Seems like a few rear admirals got wise to the gay undertones inherent in In the Navy and banned its use as their recruitment song.

The Navy went so far as to refuse NBC the use of The USS Intrepid if it meant that so much as one member of the group set foot on the scow.

According to a WENN interview with Jackson, ""The Navy wanted to withdraw the use of the Intrepid for Bob Hope's USO tour that we were gonna be on. It was a huge deal.

"Bob says, 'Please, they're a great bunch of guys and besides they're not spending the night on the boat' - like they were afraid we'd molest a sailor or something."

Bob had the groups' back and the Navy's backside. The show got off as planned. Hey, thanks for the memories, Bob, and many happy returns, Randy.

The Y M C A arm gestures we all do at weddings were not part of the group's original music video. It was created in the clubs, and then later adopted as part of TVP'S performances.

Just keep that filth away from impressionable children.