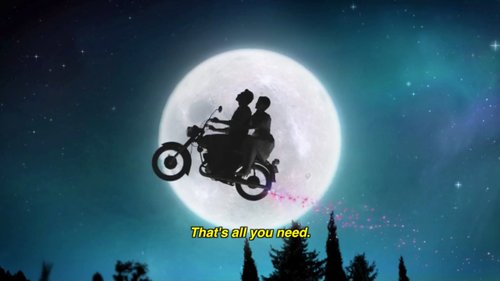 Remarkable! I've never seen anything quite like this before. Not sure what it's from. Perhaps the latest by Johnnie T. To.

The list of titles on tap for this year's 14th Annual San Diego Film Festival has gone public. Instead of clicking on 140 titles in search of out who directed what, I'll wait until the always eye-catching program brochure arrives before handing out more suggestions.

Good news for the laggards in the crowd. You now have two more chances to see this year's finest performance by an actor in a supporting role -- Hao Ping as "Ha! Ha!" -- when Drug War screens along with 139 shorts and features as part of this year's San Diego Asian Film Festival.

Who needs the Miramar Air Show when SDAFF offers top-flight entertainment such as this?

Of most interest to this reporter is the Masters series, a showcase of "premiers and rediscoveries" by undisputed heavyweights (and festival favorites) including Hou Hsiao-hsien, Jafar Panahi, Johnnie To, and Jia Zhang-ke.

Believing in my heart of hearts that my top-rated, #1 favorite movie of 2012, Jafar Panahi's This Is Not a Film, would receive a theatrical release, I passed on last year's SDAFF screening at SDMA. San Diegans had exactly two opportunities to see the film in a theatre: at SDAFF or you could have rode shotgun when I schlepped to LA for a public viewing.

With no indication that either of the local art chains -- that means you Landmark and Reading! -- plan on exhibiting the latest film by the exiled Iranian director, this could be your only chance to see Closed Curtain on a screen. Don't place your artistic future in the hands of art house bookers. Trust SDAFF!

So far, things are looking up. Let me put in a call to festival big shot, Brian Hu, get a hard copy of the schedule, and report back.