Bruck you, Masked Man! 4 cures for the common Lone Ranger

Were Matthew not brave enough to take two-and-a-half hours away from his lovely, remarkable family (and Wonder Dog, Oreo), The Lone Ranger would never have been reviewed in these pages. Two thoughts crossed my mind during the screening of the second, fecund Pirates of the Caribbean picture: either walk out or set fire to the screen. To avoid a fate worse than the one on screen, I wisely took it on the arches.

Does anyone really care about a Lone Ranger reboot? I never enjoyed the TV show; give me George Reeves and The Adventure of Superman, not some stale shoot-em-up with wooden acting. The funniest thing to emerge from the franchise came in 1979 when the owner of the Ranger character, Jack Wrather, sued actor Clayton Moore, prohibiting him from picking up cigarette money on the side while dressed in the costume. Moore went on every news outlet in the land blubbering about how the estate took his mask away.

Matthew hated it. Let the new Ranger alone. For those in need of a masked fix, here are four antidotes bound to repel the common remake.

Be sure to turn off the color for the following cartoon!

Is it just my imagination, or does Tonto look like he smoked the peace pipe and the Lone Ranger look like Space Ghost in the 90's from "Space Ghost: Coast to Coast" in that top picture?

I yield to your superior wisdom, Surf.

Moore won the suit, and was able to keep doing personal appearances for most of his later life. He didn't do a lot of roles after The Lone Ranger, because he was so identified with the part. My deceased uncle (a trick rider, rope/whip expert and bit actor in westerns during the '50s) said he had also been considered for the role.

It wasn't just his identification with the character that kept Moore from finding work; he wouldn't let it die. The guy screamed "Hi-Ho, Silver" every time he took a crap. George Reeves blew his brains out to escape his alter ego; Moore wanted nothing more than to take the role of masked man to the grave. It would have been like Christopher Reeve suing DC to wear the Superman costume in his wheelchair. Moore had nothing to do with the creation of the character, he simply fit the mask.

For a character who was created solely as a vehicle to move related toys and knicknacks (one of the first such media/merchandise franchises in pop culture history), the Ranger sure has come a long way! I met former Lone-r Clayton Moore in the '70s at a comic con, when he was being forced to wear sunglasses instead of a mask due to litigation with the character's legal caretakers, and he seemed a heroic figure indeed, a worthy role model for kids AND adults akin to Roy Rogers and early sports stars before big money and bigger egos turned most such media celebs into raging, self-destructive a-holes. I'll go see the new movie, tho I still have trouble grokking why a guy called the LONE Ranger is getting second billing behind his "sidekick" (however iconic that sidekick evolved thanks to actor Jay Silverheels - the Ranger was still the undisputed star and main attraction back then) - 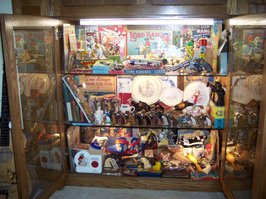 Even as a kid I expected more of my heroes than just gunplay. I was so hooked on Superman, Flash Gordon, and other colorful, bigger-than-life comic book creations that shows like "Sea Hunt," "Sky King," and "The Lone Ranger" bored me to tears. (Once I ran to comic book heroes. Now I run from them.) I don't think that I ever made it all the way through one episode of the TV show. Whatever love I have for Moore can be traced back to the pizza rolls commercial. I watched the Fraker version out of some dumb, blind allegiance to one of the finest cinematographers of his generation. I owe bore Verbinski nothing. The same goes for Depp who hasn't starred in a decent movie since "The Ninth Gate." (I said starred. "Parnassus" was a favor to a dead friend.) He's been lying down with pigs like Burton and Verbinski for so long that he stinks to high heavens. As far as I'm concerned, TLR remains a vehicle to move toys and knickknacks. Judging by the opening grosses, America agrees with me.