Walmart spokesman: "It was bad enough when we discovered the building was derelict and not the thriving local business we usually take such delight in destroying. But this? This is just sad." 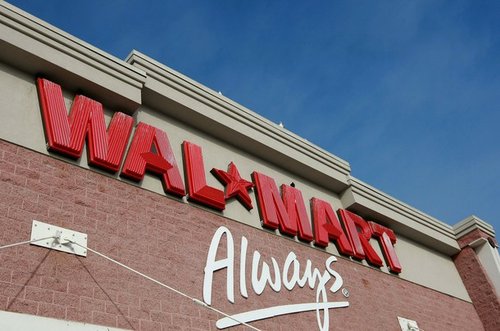 "I feel betrayed," said Walmart head of historic demolitions Mark Farmington following today's exceedingly mild response to the company's assault on Sherman Heights' landmark Farmers Market Building. (Walmart obtained a lease on the property in March of this year.) "Betrayed by the urban hipsters who didn't care enough to keep the Farmers Market going by, say, buying food there, but who should nevertheless have had the anti-corporate moxie to chain themselves to our bulldozers."

Farmington took a bite of an, out-of-season, non-organic apple flown in from Chile and chewed thoughtfully. "We came here expecting people who would fight for what they believe in," he continued. "They'd lose, of course, but the important thing would be that they had fought. Instead, we got some guy asking if we'd posted the proper permits for public viewing, and threatening to come back tomorrow to check. Oooooh, scary. Sometimes, I wonder why I even bother with the destruction of America's urban legacy. It's like nobody cares."

This was hanging from the top of the tower when I was out there this morning...along with what appears to be a shoe hanging off the 'E.' 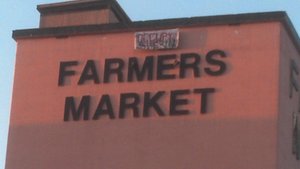 This place was a rat infested dump, even when there was still business going on there. If the community loved it so much, they should have supported it and kept it open. Also if all the local redevelopment agencies weren't so corrupt, They could have fixed up this area years ago before the economy crashed. The silos are the only part of that building that most would consider a "landmark".