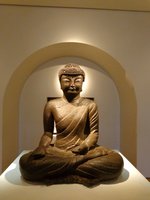 A statue of the Buddha in a museum in London.

A nice picture of the London Eye on a beautiful, sunny day.

A picture capturing the beautiful, ornate decorations on the Big Ben in London, England. 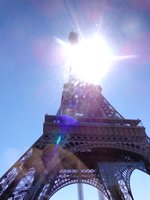 A picture captured from the window of my tour bus of the most-visited paid monument ...

The rooftops of Paris, as seen from the Galeries Lafayette.