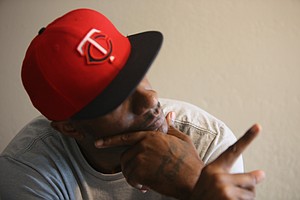 Born and raised in Southeast San Diego Ca in the tiny neighborhood of Mount Hope, The Toven Who's stage name is derivative of Ludwig Van Beethoven, is no stranger to poverty and crime and at a very young age became a product of his environment. After being initiated into the Neighborhood 41st street Crip gang, it ultimately led to numerous stints behind bars, drug sales, gang related crimes, and several near death experiences, including a shooting which left The Toven wounded. The Toven has always been inspired to create music from an early age and often dreamed of winning a Grammy just as his idol Michael Jackson did. In 1993 The Toven linked up with childhood friend Jayo Felony of the late Jason Mizell’s (Jam Maser J) label JMJ Records and in 1995 formed the original Rap group The Du Lo Gang. Later touring around the world as Felons hypman on one of Hip Hops biggest events, The How Can I Be Down Convention. The Toven was first featured on DJ Rectangles Vinyl Combat mixtape side B freestyle with Jayo Felony under the name Ray Dizidy in 1995 and also made an appearance on Jayo Felony's "Underground " album on the song titled "Do Lo Gang" released by Eureka Records in 1999. The Toven began pursuing a solo career as both a rapper and a producer going on to record countless unreleased songs including several recorded with well known San Diego DJ, DJ Fingaz. The Toven is currently signed to Block Celebrity (his own label) In 2013, The Toven released The "Ladies Only Mixtape" was hosted by Legendary on air radio personality Kevin "Slow Jammin James", who is featured on the song "I can Tell". In 2018 The music video for the song Grammy off the Cash In Ep, was shot in the San Diego community Mount Hope and can be seen on youtube. On Februrary 7, 2020 The Toven released Walk Of Fame featuring the single the title track Walk Of Fame.