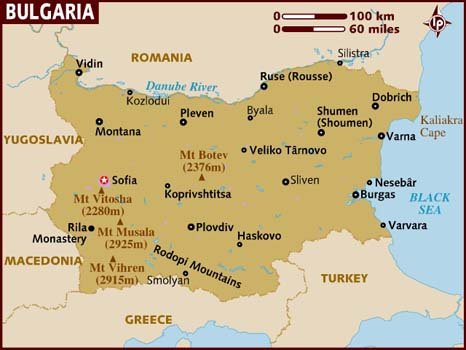 A Trip to Bulgaria

As modern history now sees it, the Bulgars became a significant group in 632 during the reign of Kubrat. This was considered Old Great Bulgaria (about 628), which became the First Bulgarian Empire and then the Second Bulgarian Empire 1185-1422). The Ottoman Empire followed in the late early 14th Century. I did not know that there was a Bulgarian Empire until visiting Bulgaria in 2011. One of the joys of travel is its educational benefits.

The Bulgars embraced Christianity in 864. Before and during this time the Bulgars primary foil was the Byzantine Empire with which it had a hot and cold relationship. From the late tenth century the language and people have been known as Bulgarian, absorbing the South Slavs and other local groups.

The second Bulgarian Empire was a medieval state existing between 1185 and 1306 (or 1422, depending on who’s history you accept0. The second empire weakened from attacks by Tatars, Byzantines, Hungarians, and Serbs. The empire ended with its absorption into the Ottoman Empire. The Ottomans continued their rule until 1878 when the House of Battenberg ascended the throne (Alexander I) Finally the house of Saxe-Coburg-Gotha ruled until 1946 when Simeon II was deposed. You just know that if this is a story about Europe, the Queen would get in here somehow.

In earlier times our old friends the Romans came, saw and conquered, leaving many remnants of their time there including a lovely bath ruin in Varna on the Black Sea.

I believe any travel story deserves at least a tip of the hat to history, but at this point I will abandon my professorial past and don a modern day traveler’s baseball cap. Still, like any place on earth, the history is an intragel part of what it is you are seeing on your present day visit. The people you see, the food you eat, the architecture you view is all a continuum of our rich and complex human history.

I arrived in Sofia from Warsaw in October, fresh off a tour of Poland, the Baltic States, and Russia. That had been a group tour and I enjoyed the help of guides and relaxed schedules and fellow travelers. Now, as I deplaned in Sofia, I was alone. But, that was the way it had been planned. I had decided to tour Bulgaria as an independent traveler. At least I had a hotel reservation.

I travelled by taxi into the center of the city taking in all I could until I arrived at the hotel: The Best Western Plus City Hotel had the security of a familiar chain in its name. I was met at the desk by Alex the assistant manager. Alex I later found out had been trained in the hotel business in Switzerland. He spoke excellent English as did all of the staff and guides

After a city tour I departed for a tour of the Rila Monastery, one of Bulgaria’s most proud sites and an historical receptacle of medieval architecture and art. .Bulgarian religious art shows the influence of the Eastern Church as one would expect it to do. I saw only a few black robed, bearded monks and they didn’t interfere with or intimidate the visitors.

My guide was a handsome young college student from Sofia. He was a fine guide, but he was still a twenty-something young male. Oophs, Polizia on our way to the Monastery. My young friend, it seemed had just a little too heavy a foot to suit the officer. He was awarded a stiff fine. At the end of the trip I included the cost of the fine in his tip even though he said I paid him too much. I was a twenty-something college student myself at one time. Hang the expense!

Near the monastery we found a lovely restaurant with outside seating right beside a rushing brook. We had whole trout, fried potatoes and a large cold local beer for lunch. With a babbling brook behind us and a pleasant waitress: perfection.

The next day I took a train from Sofia to the Black sea Port of Varna. The Black Sea has been a resort destination since ancient times. From the train I saw many small villages, once we got out of the city. Many houses had deep purple grapes hanging from trellises in front of the houses. If was warm, but not hot. It was sunny and the bunches of ripe, deep purple grapes underscored the bountiful theme of the harvest season.

Interrupting the celebration of nature at its finest were the remnants of Soviet Era decay: many abandoned factories, with ghost stories of themselves to tell. It was not unlike taking BART from Oakland down towards Fremont: the same industrial decay in some places.

After a good night’s rest and dinner at the hotel in Sofia, it was back to the airport and home via Munich and Newark on Lufthansa. They upgraded me to business class and that was a great way to end this wonderful trip.