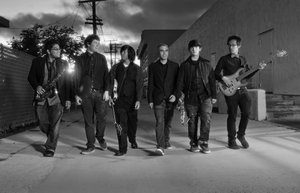 Jazz Avenue is an eclectic collection of driven, talented musicians from San Diego, California, brought together through their love for making music.

The members of Jazz Avenue assembled in 2009 at the San Diego School of Creative and Performing Arts (SDSCPA), where they began their studies in music and stumbled upon the school's award-winning Jazz program. Under the direction and mentoring of Tamara Paige, the head of the Music Department at SDSCPA, these musicians have honed their skills in playing and performing individually and as a group. Their versatility and proficiency in their musical ability can be seen in their involvement with a multitude of diverse musical settings, including playing at the House of Blues San Diego and Dizzy's, performing in the theatre world with the renowned San Diego Repertory Theatre and CYC Theatre, performing for events like the annual Ocean Beach Music and Arts Festival, Filipino Culture Night at Petco Park sponsored by the San Diego Padres, and performing for other local communities and events. They have even performed overseas in Frankfurt, Germany at MusikMesse 2012. Jazz Avenue aims to take diversity and turn it into a musical product. Drawing from the roots and nuances of Jazz music and infusing a diverse set of sounds from Funk, Rock, Soul, and even Latin music, Jazz Avenue has together developed a seasoned sound with infectious grooves and catchy melodies.